Years ago I had a cabin on a lake in northern Minnesota. About two-thirds of the way was the small town of Motley. Motley was the home of Morey's Fish Company. Morey's specialty is smoked fish. Usually when we would head for the cabin with the kids, we would stop at Morey's for some smoked whitefish, which is a particular favorite treat for me. I can buy Morey's smoked fish in my local grocery, but it just isn't the same as a smoked whitefish direct from Morey's, wrapped in white butcher paper. Morey's has grown from its humble beginnings in 1934 to a major seafood plant today. The quality of their products remain the best ever and the fish tastes just as good as it did back in the early 1970's when we would buy some on our way to the lake. 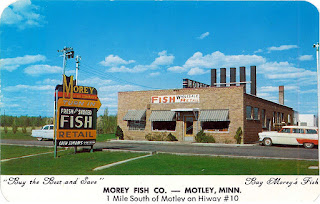 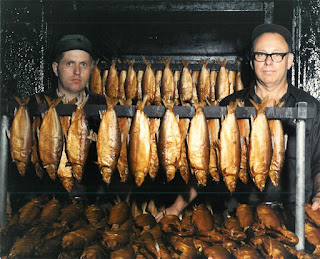 
This morning I woke to find that someone had sneaked a smoked whitefish, wrapped in white butcher paper, into my refrigerator. Half of it is already gone. It was really good for breakfast. I'm saving the rest for a treat this evening.


Oldest Son and his friend Lori had taken a road trip to Bemidji and stopped at Morey's on the way home. Knowing how much I dearly love smoked fish, they brought me one. Thanks so much. It was a really fun surprise and treat. :)
Posted by Vicki at Sunday, June 12, 2016