A gentleman by the name of Steve Boyko visited this blog the other day and left a nice comment.  I checked out his Google + site and was delighted to find that many of his posts had to do with trains.  I have ancestors who wrote about their days "railroading."  My Dad dearly loved trains, especially what he called the "long, lonesome sound" of the whistles.  He passed the love of that sound down to me.

My mother's father, Andrew Paul, was the Depot Agent in Blackduck, Minnesota for many years.  I am not sure when he started the job, but I do know he was working there at the time of his first wife's death in 1912.  I believe he retired in the early 1940's. 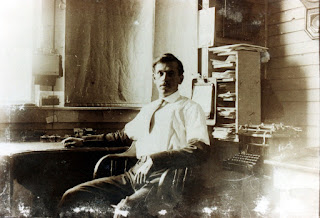 Grandpa Paul at work in the Blackduck Depot. 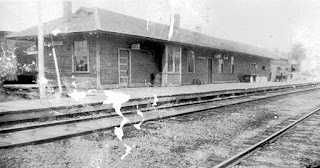 Blackduck Depot.  This photo was among pictures from my parents. 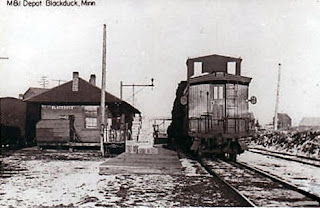 I found this photo of the Blackduck Depot online.

Andrew's younger brother, Walter, worked for many years as dispatcher for the M&I railroad in northern Minnesota.  Walter was also a prolific writer of Paul family history.  He wrote the following two stories about events that occurred while Andrew worked at the Blackduck Depot.

"One day my brother Andrew who was agent at Blackduck went out on the platform to hand up orders to a passing log train. As the train went clattering by swaying like a boat in rough water, he noticed the protruding end of a small log on top of one of the approaching loads. Knowing the dangerous spot he was in he jumped back to safety just as the log rolled off, landed on the far end of the depot platform, skidded straight through the bay window and came to rest with one end protruding into the ladies’ waiting room."

"One day a woman showed up at the Blackduck depot where my brother Andrew was agent. She announced that she was going to Bemidji right now and would ride in the caboose of the freight train then about to leave. It being against company rules to permit a woman to ride a freight train she was told she would have to wait for the evening passenger train. No, she would not wait, she was going on this freight and there was nothing anybody could do about it. Suiting action to words she picked up her bundles and climbed onto the caboose. The conductor argued with her all to no avail. She was in the caboose and in the caboose she would stay until it got her to Bemidji. Andrew and the conductor withdrew for a consultation and finally came up with a solution. They went back to the caboose and told the lady that if she  would not get off it would be necessary to set the caboose out at Blackduck and take the train on to Bemidji and leave her just sitting there. Even that did not budge her, so the conductor in her presence told his brakemen, “Well boys, set the caboose in on the house track out of the way, cut it off and we will have to ride the engine and on top.” So they set the caboose in on the house track, uncoupled it and away they went with the rest of the train, down around the curve and out of sight. Just as the train was disappearing around the curve one of the brakemen dropped off where he could keep an eye on the depot. A little further on the train stopped. Soon the woman in the caboose seeing no more hopes of getting to Bemidji on the freight came out, clambered down the steps and went back up town. Andrew, watching proceedings, then went out on the platform and gave the distant brakeman a back up sign, he in turn relayed it to the engineer. The train backed up to the depot, coupled onto the caboose and away they went."

Grandpa had a pretty good sense of humor, I'm thinking!

My cousin Gene's wife wrote this piece about the Blackduck depot some years ago.  I don't know when the depot closed or even if it is still standing.  But her article talks some about my Grandpa and gives an idea of his duties as Depot Agent.

In the early 1900's a man by the name of Andrew Paul came to Blackduck as the depot agent.  There were many jobs to keep him busy.  He was the telegrapher, the freight agent, the baggage handler.

There were four or five freight trains through town each day, and two passenger trains each direction.  Many days a train known as an extra would also come into town.

The first passenger train arrived in Blackduck from Minneapolis about 6:00 A.M.  It was known as #11.  The destination of this train was International Falls.  It turned around there and returned late in the afternoon.  Then it was known as #12.  The other passenger train was a local.  It started in Kelliher and went to Bemidji.  It got into Blackduck about 1:00 P.M. and went on to Bemidji, returning about 6:00 P.M. and on to Kelliher.

At the depot which was much larger then,--to the West there was a large waiting room, for ladies only.  Just off the office to the East was a general waiting room.  To get to the restrooms, you had to go outside and across the tracks to the little building there.  It was a single building with two doors, LADIES and GENTLEMEN, and it had a center partition.

On the days when the "extra" train would be on the track it could not interfere with the schedule of the regular trains so the extra would have to go onto a siding.  Some times these trains were so long they would hardly fit on the siding.  At times the depot agent would stand out between the two tracks to make sure the large trains had sufficient clearance, and sometimes this was only inches.

Messages were relayed by telegraph from station to station.  The depot agent would take these messages off the key, which was an apparatus which tapped out the message in Morse Code.  Some of these messages were of special freight shipments coming in, or a message to be relayed to the engineer of a train which was passing through without stopping.  At these times the message was written out and clipped to a wire hoop.  This hoop was placed on the end of a pole which the depot agent held up at the end of the platform.  The engineer would reach out the window and slip his arm through the hoop and after removing his message, would drop the hoop at the other end of the platform.  Telegrams of a personal nature were also transmitted on these keys.  Messages were taken by the agent, written up and after his day was done the agent would go out into the country to deliver a telegram.  After Mr. Paul had been here a few years a man was hired especially for telegraphy work.  This was Paul Whitney, who is well known in the area.

Depot is defined as a place of storage.  There were many things stored to be shipped out.  Great quantities of wool were shipped at times.  It was stored in huge long gunny sack bales until shipping time.  Years ago the fishermen who were visiting the area would bring in their catch of fish which were packed in crates of ice and shipped home, mostly to Iowa.  Pulpwood was a leading industry in the are in those days.  All of it was shipped out by rails on flat cars.  One of the timber buyers would come in and request the cars, it was always, "Andrew, you got any flatracks?"  The depot agent and several employees were responsible for loading much of the freight into the cars.

There were many types of cars, each with a special use.  There were the slatted cars known as stock cars.  They carried livestock to market, or they have been known to carry a load of watermelon.  Refrigerator cars were cooled by ice which was stored in a compartment at the front and back of the car.  A fan in the top of the car drew the cool air through the car to keep the fruit, vegetables, or meat from spoiling.  Each car had a number which indicated to the agent it's contents.

It is sad to see an era end.  It is sad to realize that many will never have the enjoyment of riding on a train, dining in the elegance of a dining car with the tables so beautiful with the snowy white linens, the shining silverware, and the sparkling glassware.  Those who have not had this opportunity have missed a memorable experience.

And now there it stands.  A small white deserted building.  Just a reminder of a part of history we lived with."

I have seen old train depots turned into useful businesses.  Just two blocks from my apartment is a beautiful old brick depot that had been vacant for years.  Some enterprising local ladies renovated it and turned it into a beautiful quilt shop, while retaining the look and feel of the depot.  It is good to see those old buildings put to good use instead of being left to fall apart.
Posted by Vicki at Tuesday, December 13, 2016