My Dad loved a garden.  He once told me that he acquired his love of all things growing, from his Mother.  When his older siblings were busy with the daily chores of running a farm, the youngest children spent time in the garden with his Mother, where he learned about planting and growing and harvesting.  I think part of it was that he just enjoyed spending time with his Mother.

When I was growing up, my family lived in a series of small, rental houses.  If a landlord permitted, Dad would dig up a small corner of the back lawn and plant tomatoes and potatoes, along with a few other vegetables.  In the mid 1950's when he was finally able to purchase a 20 acre hobby farm that had space for a large garden, Dad was in gardeners heaven. 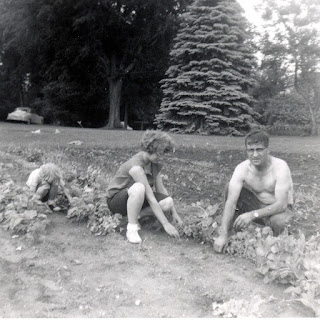 Dad, my little sister and me in Dad's garden. 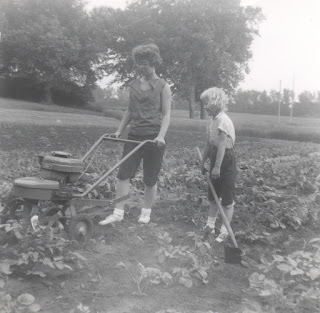 Dad poured over the seed catalogs, making lists of the vegetables he wanted to plant.  He planted all the standard vegetables - sweet corn, green and yellow beans, peas, carrots, beets, etc.  But then the fun began.  He would try something new every year.  Once he planted peanuts that were a dismal failure.  The plants came up, but the Minnesota growing season just wasn't long enough to produce the peanuts.  Another time he ordered blue seed potatoes.  These grew well and yielded a good crop of potatoes that really were blue in color.  Sadly, when cooked, they turned a disgusting gray color that nobody was interested in eating.

The 'giant pumpkins' gave us some large jack-o-lanterns, but none grew as big as advertised.  His rousing success was popcorn.  The ears were small, and when the plants turned brown in the fall, Dad picked all the ears, spread them out on old window screens, held up by two sawhorses, on the front porch, and left them there to dry.  We shelled the cobs and excitedly tested the popcorn by popping a batch.  We were not disappointed.

Dad added a small strawberry bed and a long row of raspberries.  Both did well, although we rarely had enough to use for jam or to freeze.  He didn't seem to mind, however, when he would catch us picking and eating the berries as fast as they would ripen.

One of my fondest memories is of grabbing a salt shaker and heading to the tomato patch with Dad.  We would sit on the ground, surrounded by tomatoes and eat until we couldn't any more.

During that time I joined the local 4-H club.  Each member had 'projects' for the year, usually ending with county fair exhibits.  Many of the kids raised cows or pigs or sheep to show at the fair, but because we weren't a regular farm and had not the means to care for animals, my main projects were sewing and gardening.  Those with a gardening project exhibited their best vegetables at the fair, and there was also a 'garden tour' held by the club to look at the various gardens in the neighborhood.  That meant that the garden had to be really spiffy with no weeds in sight.  After a year or two, I finally caught on and asked Dad if he encouraged me to garden for the love of raising food or if he just wanted free labor to keep the garden free of weeds.