My Mother was born in 1924 and died in 1996.  She was one of six sisters and one brother, who were raised in a small town in northern Minnesota.  Her father was a railroad depot agent and lay minister and her mother was a homemaker. 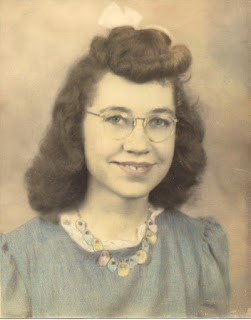 Mother believed in honoring her parent's wishes, so when her Dad told her he did not wish her to marry until she was 21 years of age, she obliged and married my Dad one week following her 21st birthday. 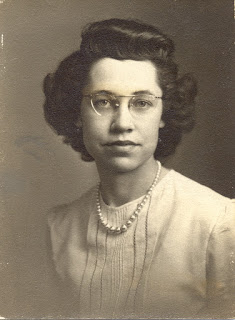 Shortly after my birth in 1946, Mother was diagnosed with rheumatoid arthritis.  The next 50 years were defined by pain. 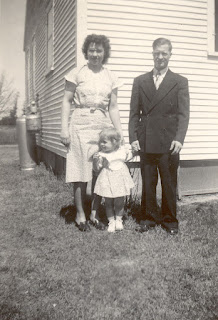 Mother, Dad and me.

Although arthritis was a huge part of her life, she was much more than the disease. 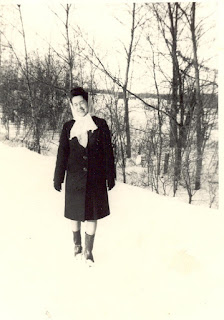 Mother about age 21 in Blackduck, MN.

Mother was musically talented.  She played piano, guitar, ukulele, violin and cello, lettering in high school for her orchestra performances.  She also had a beautiful alto singing voice and could harmonize with nearly any song.  My sister and I have decided that our singing abilities came from our Dad, who couldn't carry a tune in a bucket.

Most of Mother's siblings had musical abilities and often accompanied their father to his church services, providing the music.

My brother, being 15 years younger than me, tells me he never heard Mother play any of her instruments, for by the time he was born, her hands were becoming deformed and she could no longer make music.  My sister remembers hearing Mother play all, but I only remember hearing her on the piano, violin and cello.  The last time I heard her play the violin was at a 4-H meeting, where the parents took over the meeting and provided the entertainment.  Dad found a very small child's toy violin.  He stood in front of the room, telling jokes and clowning, playing the toy, while Mother stood out of sight, playing her violin.  I think the tune was "Red Wing," one of Dad's cowboy favorites.  I consider myself lucky to have heard her play.

Mother was an accomplished seamstress.  She sewed her own dresses as well as those for my sister and me.  We nearly always had new Easter and Christmas dresses and she sewed our school clothes until I was well into high school.

Mother enjoyed needlework and often would embroider on those white flour sack dishtowels that were popular then.  She taught me to embroider on the dishtowels as well.  She also crocheted beautiful lace doilies using a very small crochet hook and thin crochet thread.  I never could get the hang of that, but enjoy using regular yarn instead.

Mother loved decorating for the holidays.  I can remember when she took a branch from a bush and painted it white.  She had us blow the insides out of eggs, leaving just the hollow shells, which we painted in bright colors and Easter designs.  She then hung the eggs by threads from the branches, making an Easter Tree centerpiece for the dining room table.  She did the same for Valentines Day, using red and pink paper hearts.

Mother was in her element at Christmas time.  She had evergreen boughs, Christmas ornaments and silver bells everywhere.  The Christmas tree, always a real tree, was a sight to behold.  And when she could no longer walk, she could be found sitting in her wheelchair in the middle of the living room, directing Dad as to where each decoration went. 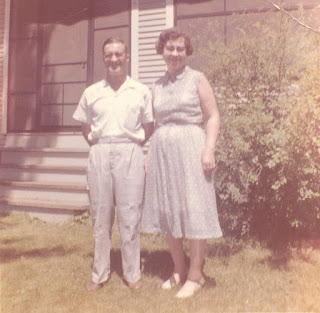 Mother and Dad at our house in the country about 1957.

As her body deteriorated, I never heard her complain.  I saw her cry only once, when I had to leave her in the nursing home section of the local hospital.  The insurance required transfer from the hospital to the home in order to pay.  Dad didn't have the heart to do the deed, so as the oldest child, it fell to me.  She begged me to take her home, knowing full well that Dad could no longer care for her.

Once Mother settled into a routine at the nursing home, she became calm and seemed to thrive.  The home is small and in her hometown, so she knew nearly everyone and the staff took very good care of her.  Dad spent much of his day with her and evenings would usually find them in a rousing game of Scrabble, which Mom usually won, with Dad saying she won because she cheated.  That became something of a family joke. 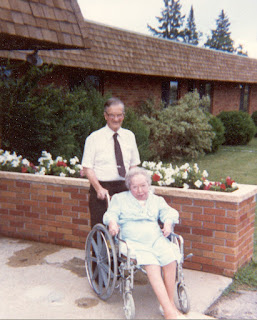 Dad and Mother outside the nursing home in Blackduck where she lived out her remaining years.

Through the years of pain and surgeries and hospital stays and nursing home living, Mother never once lost her faith.  One of the last things she did was to request her pastor to read the 23rd Psalm to her.  She died peacefully on a spring day at age 72.

There are those who tend to refer to Mother as a Saint, and that seems to irritate me somehow.  She was a good woman, but not a Saint.  She had her faults just like the rest of us.  She just was able to handle what life threw at her better than most.  Whenever I find myself slipping into a pool of self-pity, I think of her and realize that my difficulties are minor compared with what she lived with most of her life.