Ode to a Bus Driver 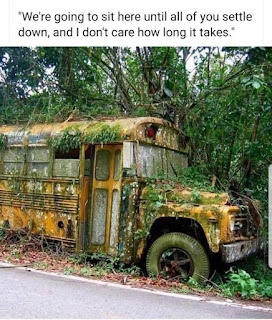 I saw this photo among the memes Gorges over at Gorges' Grouse that he posts daily and which I thoroughly enjoy.  So I stole it.  Gorges says it is OK with him.

The bus reminded me of a couple of stories told me by my Dad.  He had, in the late 1930's or early 1940's, driven a school bus in the wilds of northern Minnesota.  Dad had his own methods of  dealing with problems that can arise among students on a bus ride.

Dad said there were two teenage boys on his bus route who couldn't seem to get through the ride home without fighting with one another.  When "Don't make me come back there" no longer worked, Dad pulled the bus off to the side of the road, hauled both boys out of the bus and onto the grass along side.  Then he told them to fight.  When they just stood there looking dumbfounded, Dad proceeded to show them how to stand and how to position their arms in order to sock one another in the nose and repeated his order to fight.  All the while, the rest of the kids on the bus were at the windows, laughing at the two would be fighters.  Dad said the two boys, thoroughly humiliated, both climbed back on the bus, quietly sat down and never after gave him another minute's worth of trouble.

There was one bus rider who seemed to enjoy being a bully.  He would do things like pick on the little girls until they cried or pinch the younger boys until they yelled.  He would knock books from the hands of older students or taunt them with nasty remarks.  And one afternoon, my Dad had just about enough of this kid.

After another bullying incident, Dad stopped the bus and set the kid off on the side of the road, telling him that because he wouldn't behave on the bus, he could walk the three quarters of a mile to his house.

Dad knew this kid's father and as he got to their farm, Dad stopped and had a word with the him, explaining why his son was walking and suggesting that he might want to wait for his son at the end of the driveway.

Now in those days, a trip to the woodshed was the usual punishment for an errant son, but Dad said he later heard that in addition to the woodshed, that kid spent all of his free time doing the nastiest chores on the farm.  He mucked out the chicken house and the pig barn.  He pulled weeds in their large garden.  He hauled and stacked firewood.  And when he next rode the bus and thereafter, he was the best behaved kid there.

Dad had a way of working out problems.  I know.  I spent many hours as a young girl, scrubbing and cleaning and weeding and pushing a lawnmower to pay for my transgressions.  As an adult, I am grateful to have had a Father who cared enough to see to it that I understood right from wrong, even though at the time I wasn't exactly happy about the lessons.

I think if we had more parents willing to find solutions to their children's bad behavior, we wouldn't be adrift in a sea of precious little snowflakes today.
Posted by Vicki at Wednesday, January 22, 2020