Murders in Our Family

Usually, genealogy research consists of finding names, dates, places, census records, cemetery records and the like. Pretty tame stuff. But now and then something will pop up that is a total surprise. The two murders within our family was one of those surprises.

By way of background information, my grandmother on my Dad's side of my family was Rachel Alzora "Allie" Olmstead. Her father was Alonzo Olmstead. Alonzo had a sister, Elizabeth Olmstead who married, in 1866, Joshua Lee Foster. Elizabeth and Joshua had four daughters, the third of these being Electra Annie (Fannie) Foster and the fourth, Cora May Foster. The family lived in Jackson County, Indiana. 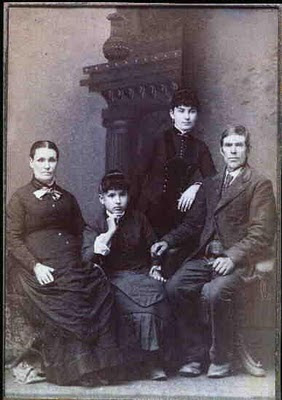 In 1889, Electra Annie married Clinton B. Jordan. Mr. Jordan was a man of questionable reputation, and according to the newspaper accounts of the time, was known for being quarrelsome and in general, a disagreeable man. Electra and Clinton's four year marriage was marked by many arguments and possibly violence. In November of 1893, Electra had had enough of Clinton's abuse, and she left him to return to the home of her parents. Her younger sister Cora, 17 years of age, was also living with her parents at that time.

It seems that after several unsuccessful attempts at reconciliation with his wife, Clinton Jordan made threats heard by others that if his wife would not live with him, then she would die with him. This was quoted in one of the several newspaper accounts of the murder.

The following is a transcript of the newspaper article that best describes what happened on November 27, 1893.

A Jealous Husband Kills His Wife, His Sister[-in-Law], His Father-in-Law, Mother-in-Law, and Then Pointed the Pistol at Himself.

Seven miles east of Seymour, in Jackson county, was the scene of a wholesale slaughter on Sunday night.

Clinton Jordan married a daughter of Joshua Foster, a prosperous farmer of Jackson county, four years ago. The couple did not get along very well, frequent quarrels and a separation of a week or ten days ago resulting.

Jordan met his father-in-law on Sunday and went home with him. Soon after his arrival at the home of Jordan's wife a quarrel ensued and the angry husband was ordered from the house. He refused to go and opened fire on the family. The first shot, which was intended for the father-in-law, missed him, but struck Miss Cora Foster, aged 17, causing her death in a few minutes. The second shot struck Mr. Foster in the temple, knocking him down. He was able to rise and ran to the home of his son-in-law, Wm. Powell, where he died, after suffering terribly for a few hours. The third shot struck Mrs. Foster, the wife's mother, in the neck, from the effects of which she died in a few hours. Jordan then turned his attention to his wife, who was trying to defend her mother, but he made short work of her with a knife and pistol. After viewing his bloody work the desperado opened his vest and fired a shot into his body that killed him instantly. His clothing took fire and the body was horribly burned.

Jordan resided at Seymour, and has not born a good reputation as a quiet, peaceable citizen. It is conceded that had Jordan not succeeded in killing himself the people down there would have made quick work of him.

J. N. Foster, who resides near Petersville, we understand, is a son of the murdered old people. The murder has created intense excitement in all parts of the state."

The second murder in our family was that of Frank Elliott Morehouse, brother of my Grandmother, Gladys Morehouse Paul. 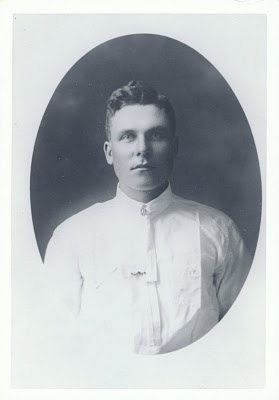 I don't recall ever hearing anyone in our family mention his death. It wasn't until I had been researching my Morehouse ancestors for a number of years that Dad gave me, along with some other family papers, the transcripts of the first two newspaper articles concerning the death of my Grandmother's brother. Another cousin found the remaining accounts of Frank Morehouse's murder, and was kind enough to share them with me. The newspaper articles below are arranged in the order that they were published.

Another sad death occurred at Frank Katcer home northeast of here Saturday afternoon. Frank Morehouse had been in Sanish Friday and went to Van Hook on the train Saturday morning and started to walk to the home of his parents. He stopped at Frank Katcer's, being sick and wanting to rest.

Left alone in the house, no one knows what followed, but when a shot was heard in the house people rushed in, finding him dead on the floor. A big rifle was on the floor and a bullet hole near his left temple and another near the back of his head. The Coroner and the State's Attorney were called and said it was an accidental shooting. The funeral will be at the house and burial to be made at Amanda today."

Frank E. Morehouse, one of the prominent young farmers living 25 miles south of Stanley, was found dead last Saturday, February 19. The Coroner's jury found that he had been murdered.

He had been shot through the head twice by a 38-5- high power rifle. The bullets entered his head just back of his ear and came out of the top of his head. The top of his head was blown open. The rifle was found lying on the floor beside the body.

It appeared as though the murderer, whoever it was, laid the gun near the body to make it look like suicide.

So far they have no clue as who did the awful deed. The murdered man was 24 years old and was to have been married in three weeks.

Shortly before his death it is stated that he had quite a sum of money on his person but when the body was found the money was gone.

The young man leaves a father and mother, Mr. and Mrs. Chester A. Morehouse, who live south of Stanley, and several brothers."

Van Hook, N.D., Feb. 24 - Frank Morehouse, a farmer living eight miles north of town, committed suicide by shooting himself behind the right ear this afternoon. The deed was done at the home of Frank Kaczor who lives four miles north of town. Mr. Morehouse had been in town the day before after medicine and started to walk home, but became quite sick and stopped at Frank Kaczor’s home to spend the night. About 12 o’clock he became despondent and at 4 a.m. he was found dead with the gun beside him.

Mr. Morehouse was a single man 25 years of age. He was a farmer and well thought of in his neighborhood."

Sanish, N.D., March 6 – In the case of Frank Morehouse, who was found dead in the house of Frank Kayzer, who lives five miles northeast of Sanish, Saturday afternoon, February 19, a mystery remains uncovered.

Morehouse arrived at the Kayzer home about 10 o’clock Friday night, complaining of being very ill. Dr. Blatherwick was summoned from Van Hook by ‘phone and found the young man’s temperature 101, and gave him some medicine.

On Saturday afternoon, about 2 o’clock, Mrs. Barron, who lives across from the Kayzer home, heard a shot and, rushing over to the Kayzer house, found Morehouse lying in a pool of blood and a rifle alongside of him.

The bullet had entered back of the right ear, coming out of the left temple, killing him instantly.

A coroner’s jury was empaneled, who brought in a verdict of accidental death. On Tuesday another jury was called and the verdict was foul play. Sheriff Slaughter and deputies are at work on the case and it is probable that new developments will be brought to light shortly.

Frank Morehouse bore a good reputation in Sanish, was not a drinking man and was engaged to be married shortly to a prominent Van Hook young lady."

Stanley, N.D., Dec 28 – Special – The murder of Frank Morehouse in his homestead shack near Van Hook, this county, last February, is laid at the door of Frank Kaczor, just arrested at the insistence of county officials after a long extended inquiry into the crime.

At the preliminary examination held in this city, Kaczor was bound over to the district court for trial, first degree murder being charged.

C.A. Morehouse, father of the murdered man, has prosecuted a vigorous inquiry into the death of his son, and his efforts were partially responsible for Kaczor’s arrest.

Morehouse was found dead in his home, a bullet wound in his head. The coroner’s jury declared it murder, but couldn’t name the guilty party.

"FLICKER TALES
Stanley – Frank Kaczor, who had been on trial in this city for the murder of Frank Moorhouse, was found not guilty."

Although there are some discrepencies between the newspaper articles of the time, the accounts give a pretty good picture of the events surrounding the death of my Great-uncle.

With the acquittal of the man accused of the murder, Frank Morehouse's death still remains a mystery. Perhaps a trip to the local courthouse or historical society in that part of North Dakota might reveal more information, and that is a trip I would like to make sometime. Letters, emails to newspapers, and internet searches have brought little or no results and I would like to find out if anyone was ever convicted of this murder.

I have always loved a good mystery and to uncover one within my family is amazing to me. I guess you never know what you will find when you start digging around the roots of your family tree.
Posted by Vicki at Sunday, July 11, 2010