Minnesota Students Get It

The following was posted on Facebook and on the Internet news page for the local television station.

"MINNEAPOLIS (WCCO) — Some students at ROCORI High School are taking issue with the school’s policy that would prevent them from displaying flags in the parking lot.

The policy was revealed to students this week as they returned to class for the new school year.

According to the text of the parking permit application, “students are not allowed to display flags or banners from their vehicles while parked in the ROCORI school parking lot.”

Furthermore, the school says that “any violations of these procedures can and may be given a ticket or towed away at the expense of the owner.”

On Wednesday, a number of pickup trucks at the school arrived with American flags prominently displayed. 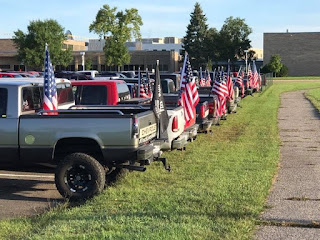 Community organizers have also set up a 2:30 p.m. “Support Our Students And Our Country” rally at ROCORI in support of the students displaying those flags. As of noon, about 30 people had responded to the Facebook event page."

We have allowed any mention of God to be taken out of schools.  School administrators have been known to send kids home for wearing a t-shirt with the American Flag on it, saying the picture of our flag might offend immigrant students.  A couple of years ago a kid here in Minnesota had been hunting the day before and forgot to take his shotgun out of his vehicle when he parked it in the school parking lot, which was against the rules.  He did the right thing by telling those in charge what had happened and asked permission to drive back home to remove the weapon.  School administrators called the police instead.

Political correctness is at an all time level of stupidity.  Under no circumstances should our flag be banned  From anywhere.  Period.

What really got to me were the comments on FB from adults condemning the kids for breaking the rules.  I suppose I should have expected it since I live in the middle of dimmocrat land.

But I will say this.  If my kid chose to break such an idiotic rule and fly the American Flag on his truck, I would stand behind him 100%.  Those students have more courage than the rest of the population who just follow along like lambs to the slaughter.

Good on you, Ricori students.  You make me proud.
Posted by Vicki at Wednesday, September 06, 2017