Do you remember 4th of July sparklers? 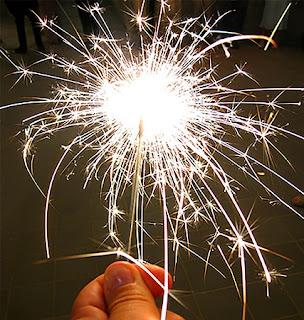 When I was  kid, my family often had a 4th of July picnic at the lake with my aunt, uncle and cousins and whatever relatives were nearby.  After a day of ham sandwiches made with Mom's homemade rolls, potato salad and watermelon and a jar of Auntie Em's famous dill pickles, we would spend the afternoon swimming.

When evening was near, we would climb into the cars and head to town to watch the fireworks.

By the time we got home, it was pitch dark.  Dad would get the packages of sparklers from wherever he had hidden them to keep them out of our hands until the right moment.  Then he would light them one at a time for each kid and we would run around the yard, leaving a trail of sparks.  We made circles and wrote our names in the air.  We played until the sparklers were gone.

I think Dad would have loved to have some fireworks that made lots of noise or shot up in the air, exploding in a blaze of glory.  But Mother wouldn't allow it.  So we had sparklers.  Dad did manage to sneak some firecrackers under Mother's radar so there was a grand finale of a whole package of firecrackers going off.

Last evening it was cool enough to open some windows.  Somewhere around midnight I heard a strange sound.  When I looked out my front window I saw in the street below, in front of the bar next door, a group of six or seven adult men and women.   They had sparklers.  They were running back and forth with them, drawing shapes and writing their names with them in the air.  They were having such a good time, laughing and cutting up just like we did as kids.