The leaves are falling, the days are getting shorter and it is pumpkin carving season.

David and Staci went with their kids and Grandma and Poppa to the pumpkin patch to pick out their Halloween pumpkins. Looks like they had a fine time selecting just the right ones. 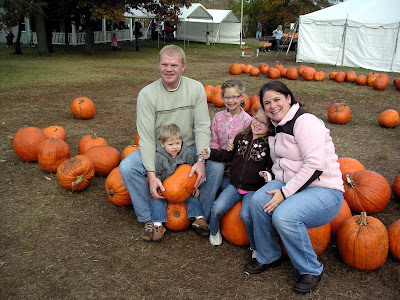 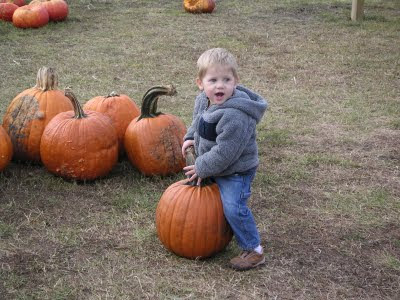 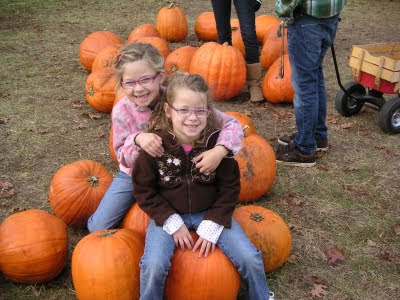 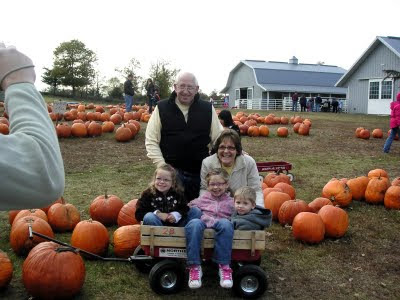 And Zach has his Jack-o-lanterns all ready for Halloween. His mom says that he designed the big scary one and the two smaller scared ones himself. 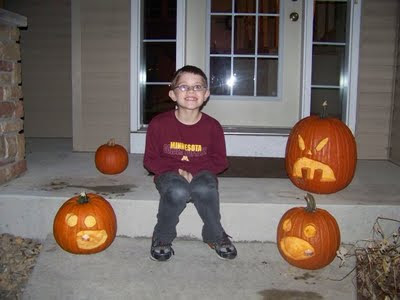 I remember that my Dad always devoted one corner of his garden on the farm for growing pumpkins. We would keep an eye on them over the summer to see if any of them would grow big enough for Jack-o-lanterns. As Halloween approached, Libby and I would stake our claims on the biggest pumpkins for carving. The smaller ones were brought in from the garden, cooked and canned for pumpkin pies, pumpkin bars, and all the other delicious things made from pumpkin. It always seemed to me that the home grown and home canned pumpkin produced pies that tasted better than when using store bought canned pumpkin.

When I had children of my own, I followed Dad's practice of growing a patch of pumpkins in my garden. Over the winter, I would go through the seed catalogs and order seeds that promised to produce huge pumpkins. They never quite lived up to the expectations, but we had some pretty respectable sized Jack-o-lanterns at Halloween time. I so enjoyed carving pumpkins with my kids, seeing the scary faces their imaginations came up with. When the Jack-o-lanterns all had candles in them, and their scary faces glowed in the night, it was time to roast the pumpkin seeds. A friend of mine had given me the recipe, which is nothing more than tossing the seeds in melted butter, placing them in a single layer on a cookie sheet, sprinkling them with salt, and roasting them in a slow oven for an hour. A couple of times we experimented with using seasoned salt or garlic salt, but we seemed to like the seeds with plain salt the best.

Some say that fall is a depressing time of year because it means that lazy days at the lake, family picnics, boat rides and all of the other summertime activities are over. I just don't see it that way. Although this year I could have used a little less rain and a little more sunshine. When my family lived in the northern part of the state, we would often in the fall of the year pile into the car to go for a ride and look at the beautiful fall colors. A favorite drive of mine was the Turtle River Lake road. Sections of that road wound through forests of bright orange and red trees, while other parts showed us yellow and gold leaves. I never seem to get enough of the beauty of nature.

Fall was also a time to rake the fallen leaves from the yard. Rather than bagging them up in huge plastic leaf bags, we raked them into piles on the driveway and burned them. I still miss the smell of leaf smoke in the air. Last year David's kids helped him rake leaves, and it was good to see that kids still enjoy jumping into a pile of leaves, as I did as a child. 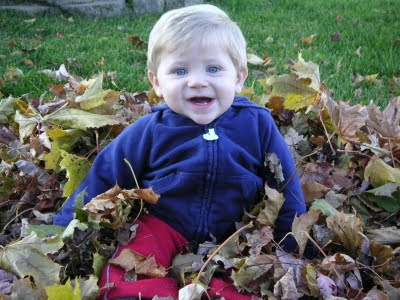 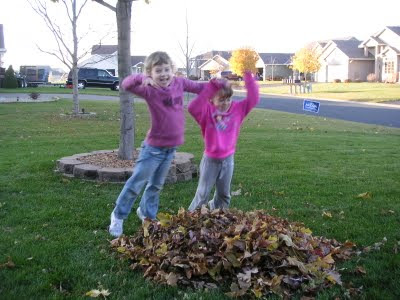 I love this time of year.
Posted by Vicki at Thursday, October 29, 2009 No comments:

A few weeks ago Jeri told me that Nicki was having a birthday party to celebrate her 13th birthday, at their house, with several 12 and 13 year old girls attending. The weather was still warm, and the plan was for the girls to sleep in a large tent in the back yard. I told Jeri that she was a brave woman, but it sounded like lots of fun for Nicki and her friends. By the looks of the pictures Jeri took, it seems that the party was a huge success. 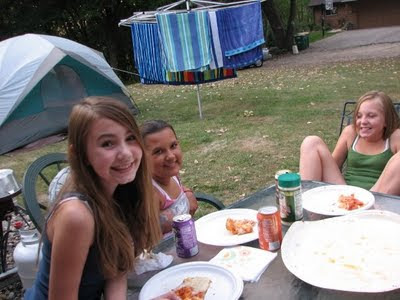 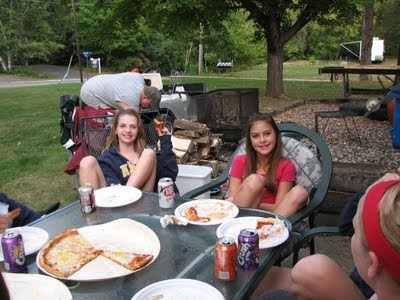 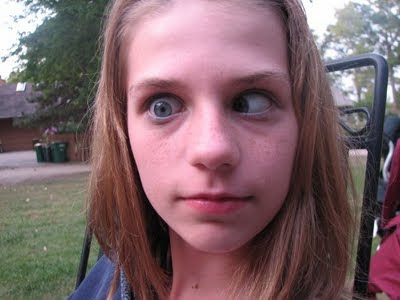 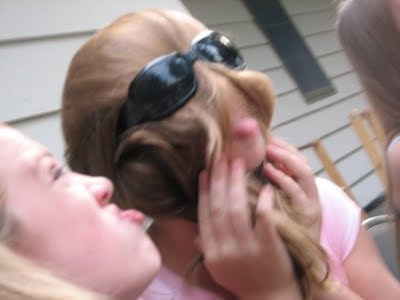 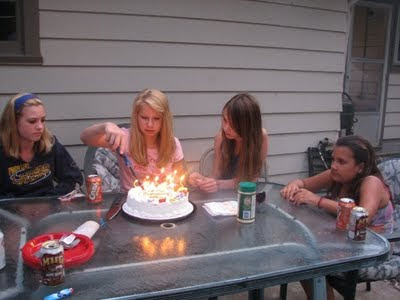 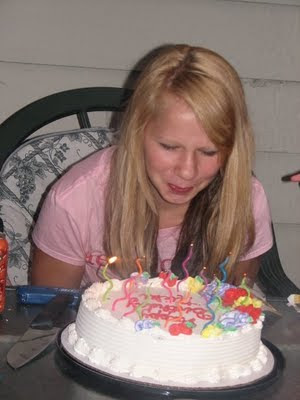 During the evening a friend and neighbor of Jon and Jeri dropped by, and he offered to take the kids wake surfing the next morning. In spite of being up most of the night doing whatever it is that teenage girls do at a sleepover (From what I am told, sleep was not involved!) the girls were up and ready to go out on the lake bright and early. Chris joined the party, and they all went out to wake surf, with varying degrees of success. Looks to me like they really had fun. 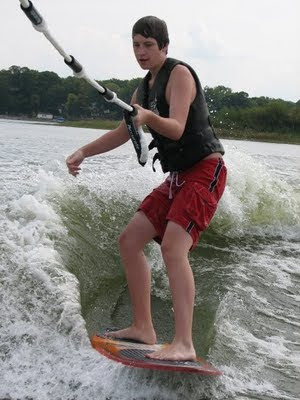 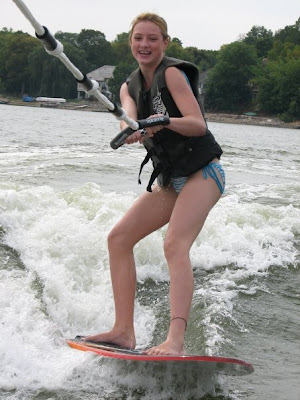 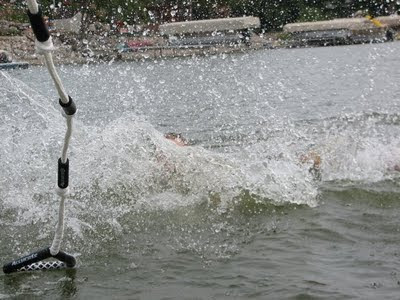 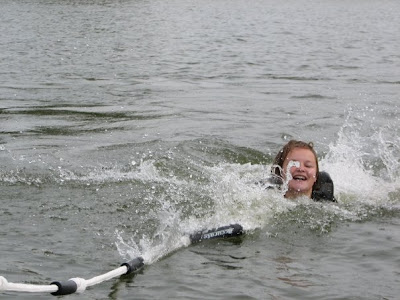 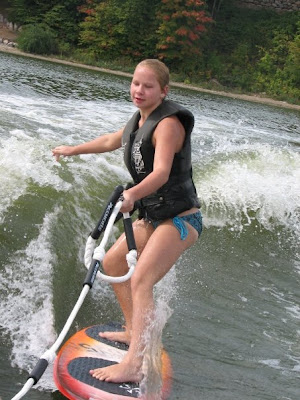 Where has the time gone? When Chris and Nicki were born, Mike and I were living in Branson, Missouri. It tugged at my heartstrings to know that Chris was growing and I was not there to watch him do it. So when Nicki was born, I told Mike to start packing. We were going home. Best move I ever made. But it just doesn't seem like 13 years have passed since I held my first baby granddaughter in my arms. There have been four more grandchildren born since that time, and I am so very lucky to be able to be close to all of them. 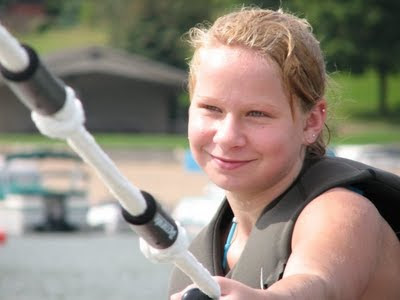 Love,
Grandma
Posted by Vicki at Saturday, October 10, 2009 No comments: