We prepare for what we like to call a time when the s**t hits the fan.  Most think of that as being national or world wide disasters.  However, it can also be on a personal level.

So yesterday I was walking through my apartment when something popped in my right knee.  After some well chosen words I discovered that walking had become somewhat interesting.  One of the first things I did was whine to a friend and the second was to proceed with feeling sorry for myself.

After icing my knee, which seems to be getting better, the pity party continued.  Right up to the time a short while ago when my phone rang.

It seems the extended warranty on my car has expired.  And since the call had interrupted my sitting with my leg propped up, I was in just the right mood to discuss this with someone named Jason who had an East Indian accent.

That is when Jason hung up on me.

It is amazing how good a person can feel when they get a scammer to hang up on them.  :)

the pandemic is over.  Amazing!

I check my local news sources now and then, mostly for amusement.  For the past two years the daily headlines have told us how many new virus cases were reported and how many deaths were attributed to the virus.

I guess there is something new to distract us from the invasion at our southern border, the price at the gas pumps and the empty shelves and higher prices at the grocery store.

I have no doubt that the Russian invasion of Ukraine will have an effect on us here in the States.  And in the meantime, I don't see anyone doing a single thing to deal with the problems that directly affect US citizens.

So, as long as I cannot change what is happening in the world around me, I will continue to do what I can to make sure my family is taken care of.  This week I canned ham and added pork chops and chicken to my freezer.  My grocery order included paper products, over the counter meds and instant potatoes.  I will continue to stack it as high as possible.

I refuse to be one of those people who, when the shelves are bare, will look around and wonder what happened and what are they going to do now.

Past Time to Get Serious

I had planned to do a couple of experiments like dehydrating mashed potatoes and canning syrup made from fruit peels.

After taking a long, hard look at what is happening in the world around us, I decided the best thing I can do right now is stick to my tried-and-true methods of preserving food.

As preppers, we learn to adapt to circumstances.  Only those who live under a rock could fail to see what is happening across our northern border.  Canadians who want their freedoms and lives back and who have been peacefully protesting toward that end, have been treated like terrorists by their leaders.  There is a similar protest planned for the US.  What do you suppose the outcome will be should our people be treated like the Canadians.

Canada is literally in our backyard.  If you believe nothing like that could happen here, you are delusional.  Enjoy your rainbows and unicorns.

I don't think I have the time to play with experiments.  And if I haven't been serious about preparing, I should be.  Whether the truckers here decide to form a convoy to DC, or if they just decide to go home, lock the truck door and wait, the results are the same.  Goods will not be delivered.  Stores can run out of food in maybe three days.  People will be hungry in about a week.  Hungry people are dangerous people.

I don't know what the near future holds, but I am not taking chances that everything will be just fine.  Things here have not been just fine for at least two years.  So, I am busy canning and dehydrating and filling in any gaps in my preps.  That's what we do.  We get ready for whatever happens.

God bless those Canadians who want nothing more than to be free from tyrannical mandates.  And bless those here in the States who are on a similar mission.  And I wouldn't mind seeing some righteous punishment for those who willingly hurt the people they are supposed to care about.

Retirement Does Not Equal Boredom

Before I retired, folks warned me that I would be bored. In the thirteen years since that time, I cannot recall a single boring day.

My time at present is devoted to food storage. Between the store shelves that are in my area becoming less stocked week after week and the Trucker Convoy in Canada that has an effect on the delivery of goods here in the US, I am taking no chances and am doing everything I can to continue stacking it to the rafters.

By the way – I am behind the Canadian Trucker Freedom Convoy 100%. There are rumors of a similar convoy here in the States and I truly hope it happens. All the mandates and lockdowns and regulations need to stop. We, too, need our freedoms back from those who wish to have complete control over our lives.

These convoys will have an effect on the condition of store shelves and not just groceries. Perhaps that is the price we will need to pay to get out from under the tyranny of those who forget who pays their salaries.

So being mindful of the possibility of even more bare shelves, my grocery order this week included pork shoulder roast on sale at 99 cents per pound, with a limit of two. I thought I would just freeze them for future meals. Turns out there were two roasts in each package and each package weighed about 15 lbs. So I canned them and got 13 quarts of pork roast.

I dehydrated 6 bags each of frozen green beans and frozen broccoli. I have 10 lbs. each of potatoes and onions to dry this week. And 8 lbs. of fresh carrots gave me 7 quarts canned.

I don't know what is going to happen in the future, but whatever it is, I do not want to be caught short.

There is so much bad stuff going on that it is easy to get mired down in it all. Sometimes we just need a break.

My son and his son went ice fishing.

Lake of the Woods is probably the most beautiful place in Minnesota. It is located at the most northern point in the state and shares a border with Canada.

I have fished the lake in the warmer months. I haven't the courage to visit in the winter.

To reach their fish house my son and grandson drove about 10 miles over the ice. It had been cold enough that the ice was over 50 inches thick. David told me that the temperature reached 30 degrees below zero while they were there. 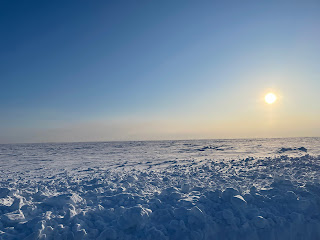 They had good luck fishing. 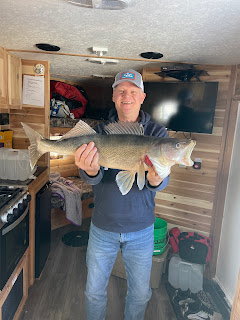 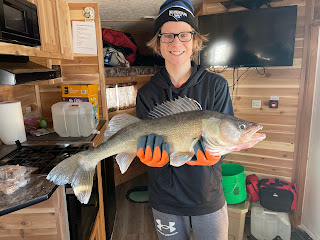 My granddaughters have been to the Lake with their Dad in previous winters. He hopes they can join him for one more trip before winter ends.

This is a photo of two happy fishermen. :) 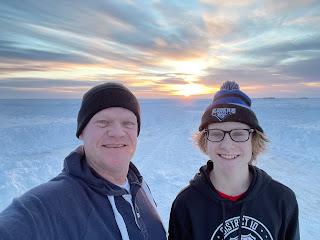 Ice fishing isn't high on my list of fun things to do, but it ranks right up there with my son and his family. In these times that don't look like they will get better any time soon, it is important to go do whatever it is that pleases us. We continue to keep track of what is going on around us and we continue to prepare as best we can. We have had two years full of mandates and restrictions. It is time to live again.