each and every one of you a wonderful Christmas.

I am taking some time to get caught up on a few things here in my little corner of the world, but I shall return right after the New Year.  May God richly bless all of you.

I have a 13-year-old grandson. Like most 13-year-olds, he sometimes does not make the best choices.

A while back he was in Shop Class. That class is divided into two groups – one group is in the shop while the other is in the classroom.

The classroom is outfitted with tables and stools. The teacher's stool is fitted with wheels.

While unsupervised in the classroom, this group of 13-year-olds set up their stools like bowling pins, sat a kid on the teacher's stool as the bowling ball and were on their way to a high point bowling game when caught at it. The school principal had a visit from several 13-year-olds and the parents were informed of their children's activities by email.

Just yesterday this selfsame 13-year-old somehow found himself in possession of a snowball in the classroom. Nobody knows for sure just how this happened, but another visit to the principal's office and another parental email was the result.

As my son was relating the snowball story to me today, he said there were consequences at home for acting up in class. But he also said that he found it disheartening that most teachers expected their students to be carbon copies of one another.

Granted, bowling in shop class and a snowball fight in another class probably weren't the best choices. But I have to give the kids credit for imagination and thinking outside the box.

Schools are turning out many, many kids who will grow up to follow along like sheep, do exactly what they are told to do and never once question authority.

Give me the kid who goes bowling in shop class and has a snowball fight in another. Those are the ones who do not follow the crowd but who think for themselves and use their imaginations.

Those are the kids who will grow up to do great things.

My grocery order last Thursday contained potatoes, onions, carrots and celery that are now in quart jars as a stew/soup base. Tomorrow 20 lbs. of hamburger will be canned.

So until I come up for air, I leave you with this picture of my Great Granddaughter, who was not at all impressed with Santa and Mrs. Santa. :) 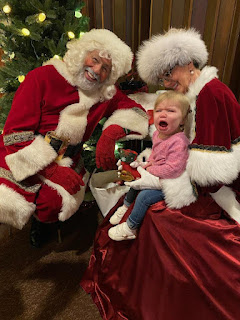 Methinks this one is destined to become a family classic. :)