Got another one of those phone calls I love so much.  Boston called me a little before supper time to tell me to check my email.  They had sent me another picture! 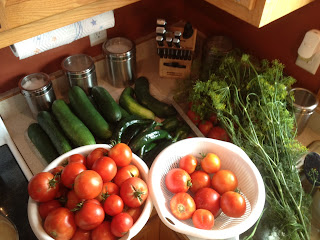 Boston said that she had been in the garden picking vegetables.  They have tomatoes growing along a little fenced in area that is a run for Charlie the Beagle, and she said that she had to go to the other side of the fence to get some of the tomatoes.  It seems that the vines had grown through the fence.  Boston said that she and her Dad were going to can some pickles this evening.  I'm not sure what they are going to do with all those beautiful tomatoes.  She said there are lots and lots more waiting to turn red.

Boston also told me that there were some more cherry tomatoes with my name on them.  I asked her if she would like to make a trade.  Duane had brought me ten cases of peaches and I spent today and will spend the next couple of days canning them.  Am thinking about some peach jam and peach butter as well.  I have been canning in half pint jars for Duane, as he likes that size to take to work.  And pint size jars of peaches make a couple of meals for me.  So I told Boston that if I could have some more cherry tomatoes, I would can up some peaches in quart jars so there would be enough for her family, and I would trade the peaches for the tomatoes.  She thought that sounded like a pretty good trade.  It is, too.  The peaches are delicious!

Boston said that her Dad thought it might be good for her to spend a day with me and learn to can things like peaches or jam.  I thought that was a pretty good idea .  My mother taught me.....her mother taught her.  I like the idea of passing along those skills to another generation.