That is the question.

I have seen many reports from government officials who tell us we must.

I have seen many reports from reputable medical professionals who say we should not.

What I am doing is stocking up on Vitamin C, Vitamin D and Zinc.  And I am living my life as close to normal as possible.

I have nothing against those who follow all the restrictions and guidelines.  Grownups are capable of deciding what they want to do.  But for me, I do not have enough time left to waste it by living in fear.

My thanks to my friend 'Red' for sharing the video with me.  And to others who keep me informed.  It is appreciated.

Do your research.  Make up your own mind.  And to those who think it is alright to shame those who do not believe as you do...

Sometimes Success - Sometimes Not So Much

I think that sometimes a stretch of sub-zero weather may put us into hibernation mode.  At least that seems to have been the case here in my frozen corner of the world.  Not much has happened except with a crochet hook, yarn and some lovely naps under a green fuzzy blanket.

I did manage to do some dehydrating.  The coleslaw mix and sweet corn came out just fine.  The peas...not so much.

I have had problems in the past with dehydrating peas.  Before I got a dehydrator with a thermostat, peas would come out looking like the centers of each pea were missing, leaving just an outer shell.  Even with the newer dehydrator, peas didn't always dry well.  But being one who doesn't give up easily, I thought I would give it one more go.

Followed the instructions to the letter.  Rotated the trays halfway through the drying cycle as is necessary with my style of dehydrator with the heating element and fan in the lid.  At that stage the peas were looking good - drying nicely.

Later when I went to remove the dried peas from the trays I found that each and every tray had developed small areas of mold.  I don't know why.

I had to toss the whole works.  Sigh.

I do believe I will be either canning or freezing peas from now on.

On the bright side, although it is snowing again, the temperature here in Minnesota is finally above zero.  The weather guessers tell us that in a weeks time we may see close to 40 degrees.  Above.  Zero.

Dig out the sun block and flip flops.  We're having a Heat Wave.  :)

It's The Small Stuff

I read blogs and watch videos, mostly about homesteading and preparedness.

Some are over-the-top with hints about what to do during a zombie apocalypse.  Others talk about all sorts of expensive gear needed when our world comes crashing down around us.  I don't pay much attention to these.  The only 'zombies' I have seen in my neighborhood are at closing time when the bar next door was still open for business.

Many others have useful information on a variety of subjects related to food storage and preparedness and I have learned much from them.

I find it is the small things that matter.

When the snow is falling and the wind is howling, having the ingredients on hand to bake bread or cook a nutritious meal saves me from having to brave the elements to run to the store.

When Oldest Son runs out of something, he can just look in Mom's pantry, knowing chances are good he will find what he needs.  That's the reason most of us prepare - for our families.

This morning I saw why we have water stored.  Some have water storage systems using very large barrels.  That's a great way to store water if you have the space for it.  Three room apartments are not built for that type of storage, so my water is stored, mostly behind my sofa, in 2 liter soda bottles and juice bottles.  And I have several cases of bottled drinking water stored as well.

There is construction going on in my building and because of that, the water has been shut down several times.  When I went to make my morning coffee, there was no water flowing from the tap.  As anyone who knows me can attest, I am not fit company until I have had at least two cups of coffee.  But it was easy to open a bottle, fill the coffeemaker and make coffee.  The world at large is again saved from a grumpy old woman who has been deprived of her coffee!!

It is the small stuff that matters sometimes.  :)

When you lead a quiet life...

it is sometimes a bit difficult to find things to write about.  There is no food preservation activity in between grocery deliveries every two weeks, once I take care of whatever I get to add to my food storage.

This past week, for example, I spent a lot of time working on two crocheted afghans I am making for my two youngest Grands.  For me that activity is enjoyable and relaxing.  To most everyone else it is about as exciting as watching grass grow or paint dry.

But this morning inspiration hit in the form of something that has become a morning routine.  I always go over to Gorges' Grouse where he daily posts not only memes but also lots of pictures of bygone days.  I find these pictures particularly interesting because many of them depict the time when my Dad was a boy.  I can see what it was like when he worked on wheat thrashing crews as a young man or when he plowed the fields using a team of horses.  I have seen pictures of logging camps like the ones Dad worked in as a young man in northern Minnesota.

Gorges includes pictures of people.  We don't always know who they are or the location, but the pictures show how they were dressed and what they did and what the towns and farms where they lived looked like, anywhere from the late 1800's through the 1950's.  Those pictures bring to life some of Dad's stories and I am most grateful for the time and effort Gorges puts into keeping us mindful of those who came before us.

So with that in mind, here are a few of my own treasured photos that perhaps someone other than my kids and grands might enjoy. 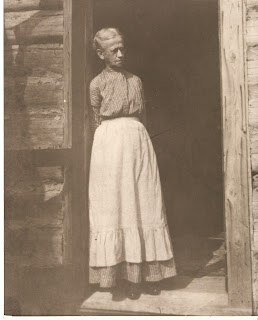 This is my maternal Great Grandmother, Adella Caroline Curtis Paul.  She was born in 1847 in Chenango County, New York.  By 1870 she, her husband Hollis Brayton Paul and their children were living near the town of Barnum, Minnesota.  In this photo she is standing in the doorway of their cabin on their farm.  Her son, my Grandfather, wrote that she loved to stand as she is seen here, watching the sunset of an evening. 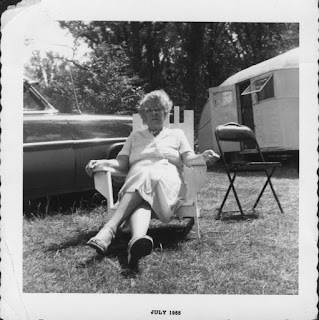 This is my maternal Grandmother, Gladys Adell Morehouse Paul.  She was born in Minnesota in 1896.  She is shown here relaxing at our "lake house."  Dad had dragged home an old travel trailer, fixed it up and rented a lot on a local lake where we had the best summer ever for kids.  Grandma would often spend a day at what was, tongue in cheek, called our lake house. :) 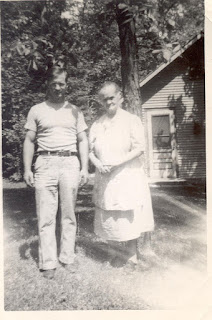 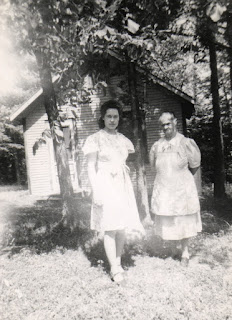 This is my Grandmother Rachel Alzora Olmstead Matheny (known as 'Allie') shown here with my Dad, her son and with my Mother.  The year is 1946.  She was staying with my parents to help out following my birth.

My Grandmother was born in 1870.  As a child she moved from Indiana to Minnesota by covered wagon.  She and my Grandfather moved to northern Minnesota where they farmed and raised their family of 9 children.  In the above photo taken in their front yard, my Great Grandfather is on the far left and my Dad is on the far right.  The photo was taken in the early 1920's. 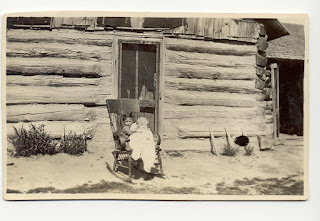 This is a picture of my Dad, held by his sister in front of the first house my Grandfather built on their farm.  Dad told me that when his father built the new house, it was built around the old one, tearing it down bit by bit as the new house went up.  The date is 1911/1912. 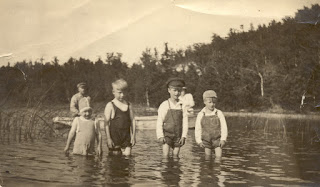 My Dad is the small kid on the right and his brother is next to him.  Dad told me he had pitched a fit before this picture was taken because he didn't want to get his new overalls wet.  When you are the youngest of 9 kids, a new pair of overalls is a big deal!  This picture was taken about 1917 or 1918.  Many years later I swam in this same lake at this same spot.  This lake was also where in the winter my Grandfather would drive a hay wagon puled by a team of horses out on the ice and cut blocks of ice that they hauled home, packed in straw and kept  in their root cellar.  Those blocks of ice also kept Grandma's ice box cold year round.

I hope my kids and grands will enjoy this little piece of family history and thanks to the rest of you for indulging me.

At this time when so many are trying to erase or rewrite history, keeping track of our own family history is important.  It is who we are and we need to never forget where we come from.