No other words describe our weather.  Yesterday we had a heat index of 110 degrees.  At 5 am today it was 80 degrees.  The central air in my building is struggling, with my apartment a few degrees warmer than the thermostat setting.

I am ready.  My fridge is stocked with bottled water and quart jars of iced tea.  Fans are set up in front of floor vents to help move the cool air.  My activities for today include reading and a little bit of computer time.  Number One Son stocked my freezer with popsicles.  As soon as I post this I will be putting into play a trick Duane learned while he worked as a restaurant cook.  I will get dishtowels wet, ring out the excess water and put them in the freezer.  One of the frozen towels applied to the back of the neck does wonders for cooling a person down.

I really feel sorry for those who need to be outside today.  Storms are predicted for this evening.  I hope they cool things down a bit.  Stay cool and safe.
Posted by Vicki at Saturday, June 30, 2018 10 comments:

While reading online the other day, I discovered that Laura Ingalls Wilder was a racist.  Must be true, for the American Library Association, in it's infinite wisdom, has decided to remove her name from a prestigious award for children's literature.  They do not like the way Wilder wrote about African Americans and Native Americans.  Seems her words don't conform to the politically correct standards of today.

Born in 1867, Wilder's books chronicle her life as a child in a pioneer family.  The words and terms she used reflected the times.  They are a part of our history.

I bought the entire set of 'Little House' books for my children.  I read them all, marveling how those hardy pioneers lived and worked and loved and managed to survive under harsh circumstances. But I suppose by today's standards I should be condemned for exposing my young children to the evils of racism.

Finding this attitude of burning history on the alter of political correctness, I dove a little deeper into the subject.

I was not at all surprised to find the political correct among us throwing hissy fits over the Uncle Remus stories, published in 1881.   Had they done their research, they would have found that the author held in high regard those black story tellers from whom he gathered the stories.  The dialect he used when writing them had nothing to do with mocking that kind of speech and had everything to do with preserving the integrity of the stories.


Some of my fondest childhood memories are of my Dad reading to me from the big book of Uncle Remus Stories.  The antics of Br'er Fox, Br'er Rabbit and Br'er Bear were a delight to a little girl and the lessons taught remain with me.  But all that should be erased from our history, according to those who can find racism in a jelly sandwich.

Moving on to 'Little Black Sambo,' the PC people lose their minds.  How dare any author write about a character named Little Black Sambo.  Those who know best about these things, scream 'racism' at the top of their lungs.  So much so that some publishers have changed the setting of the story to other countries where dark skinned people are not prevalent.

The PC police may have done better to leave this children's book alone, for in it, Little Black Sambo is the hero, outsmarting the bad tigers who stole the fine clothes Sambo's mother had made for him.  He not only got his beautiful clothes back, he got the tigers to chase each other around and around so fast they turned into butter, which his mother used to make pancakes.

This was another children's book read to me long ago.  Kids love the story, and through the telling learn that bullies are bad, even if they are tigers, the boy in the story is smarter than the bad guys and there are consequences for bad behavior.

The PC police can't stand to leave these stories alone because, as we all have been told ad nauseam, most everything today is racist, racist, racist.

Bullwinkle and the News

Most mornings I scroll through the news websites while getting my caffeine fix.  The news wears me down.  If politicians aren't fussing about one thing, they are fussing about another.  None of which makes any sense to me any more.  They pretty much spend their time blaming one another for what is wrong and spend no time working together to fix the problems.  They would rather call each other names and throw tantrums.  I have seen better behavior on a playground full of toddlers.

I have pretty much given up on the news.  It isn't really news, after all.  It is finding 'causes' to use as ammunition to fire at the opposing political party.  This weeks 'breaking news' will be next weeks bird cage liner.

So this morning I finally had enough of the posturing, political points gathering and useless rhetoric.  I found an alternative to the insanity.

Remember that TV cartoon show from the early 60's?  It featured a moose and a flying squirrel and was full of silly puns and satire and was just plain funny.  My Dad loved it.  The jokes appealed to his wry sense of humor.  My favorite part is the 'Fractured Fairy Tales.'

The news is no longer news.  It is propaganda.  At least Bullwinkle and company don't make my blood pressure rise.  They make me laugh.  We need as much laughter as we can manage these days.

Folks, I have no clue what happened.  It seems that Blogger hiccuped and my comments were deleted.  I value those comments and am working on it to see if I can get them back.
Grumble, grumble...
Posted by Vicki at Thursday, June 21, 2018 6 comments:

if other people clean up before the cleaning lady arrives.

This morning found me washing up the few dishes that were in the sink, folding the light quilt and the green fuzzy blanket I keep in the living room for recliner naps, straighting up my desktop, etc.

Granddaughter Boston is in Green Bay, Wisconsin for dance competition Nationals.  Her Mom is with her and helps get her ready for each dance number.  This is one of the competitions that live stream each day, so I get to watch.

Boston had her solo tap dance on Wednesday.  I don't have a picture of her in this year's costume, but here she is from last year. 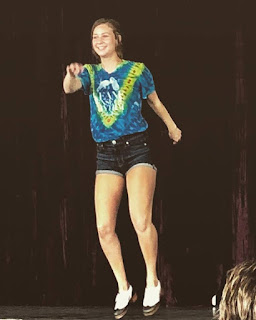 The girl loves what she does and Wednesday she won First Place in the tap dance division.  And yes, I am unabashedly bragging.  Grandma's get to do that.

Today she has three dance routines with the group from the dance studio she attends.  It is easy for me to pick her out in the group, just by the way she moves.  I am ready.  Popcorn has been popped.  Coffee has been brewed .  Bring it on.

everyone has a bad day.  Mine showed up earlier this week.  Between shortness of breath and arthritis, I felt sort of like something you would scrape off the bottom of your shoe.  Normally I just work through it, but this time I found myself sloshing around in a puddle of self pity.  I was remembering all the things I was once able to do.  Gardening, taking a dog for a walk, going for a drive, being able to take care of myself without help.

And then I remembered this. 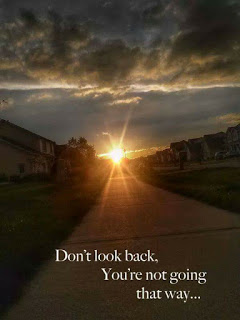 I stole this from Gorges over at Gorges' Grouse.  He posts some pretty good memes on his blog and this one I saved for an occasion like this.  Remembering the past is good when it comes to learning from our mistakes.  And it is good for remembering good times.  But when remembering serves no useful purpose, then looking forward is the way to go.

Up to My Elbows in Yarn

So the other evening my daughter Jill - the one with the excellent taste in yarn colors for afghans - stopped by, toting three huge bags stuffed full of yarn.  Here is what she brought.  (My photography skills leave a lot to be desired, but I think you will get the idea.) 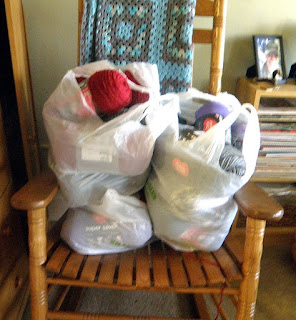 When I went to pay Jill for the yarn, she wouldn't let me.  She told me it was my birthday present!  Wow!

She sat and visited with me for a time.  We came up with a few ideas on how to use those colors in the next two afghans.  Of course I couldn't stand it until I made some sample granny squares. 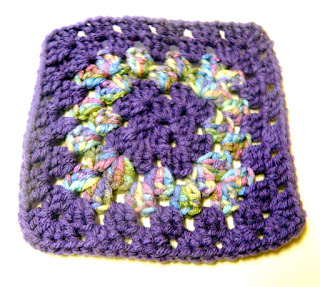 This one is for Maddie Mae.  There is some gray yarn intended to go with these two, but it didn't quite work, so I am just using the two colors of yarn instead.  The multicolored yarn is so beautiful that I don't think it needs anything else except the purple. 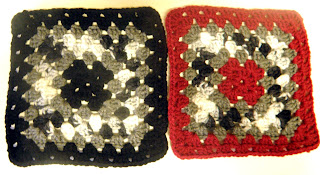 These are the squares for Jacob's afghan.  Jill suggested I find a way to make an afghan with stripes, so I will sew the squares together in alternating rows of black and red.

I think they are going to be such fun to make.  I guess there is no real rush.  Jacob, the youngest, is only 10.  I just want to be sure all six grands get their graduation afghans.  And it gives me something to do that gives me pleasure.  Win - win!
Posted by Vicki at Sunday, June 10, 2018 14 comments:

I was awakened by the sounds of dump trucks and heavy equipment banging about in the street outside my windows.  This was followed by jackhammer and cement saw noises.

Shortly thereafter there was a knock on my door.  It was Chris, my long, tall oldest grandson.  My gosh, but that boy is tall!  He is working with the excavation crew outside my building today.  They are tearing up the street in order to run new water and sewer lines into the building next door.  Which explains why my landlord let us know our water will be shut off all afternoon.

Anyway, Chris wanted to pop in to give his Grandma a hug and to wish her a happy birthday.  (Yep - 72 years have come and gone already).  He couldn't stay very long.  He was on the clock, after all.  But when it comes to the grands, I will take every minute that I can!