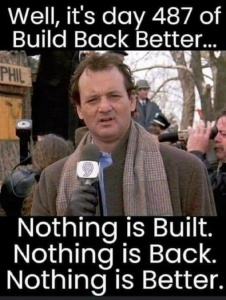 That pretty much sums up my opinion of  the current administration.

However, one might add the term 'despicable' for the empty suit and it's handlers for using the murder of children to promote a gun grab.

Mr. President, we have guns to protect ourselves from people like you.

One of the friends of this blog has her husband in the hospital for tests.  It is serious enough that he was transferred to a larger hospital for further testing.  I am sure that prayers for his health will be sincerely appreciated.

One thing I love about my blog is that I know when one of us needs prayerful help, it is freely given.  Thank you, my friends, for being the kind and caring people I have grown to love.

Is anyone else tired of the nonsense?

God made man. And then made woman. And that is all.

Kindergarten teachers should not teach children about their gender. That decision has already been made at a much higher level.

If there is confusion about the matter, a quick peek inside knickers should tell a person what they need to know.

Apparently, lawmakers in Oregon haven't figured that out as they now require tampon dispensers be located in boy's bathrooms.

Really? That's what you people are worried about? I honestly didn't realize there were that many people whose common sense had left the building.

I have a couple of things to worry about that are a bit more important.

Like many of my vintage, I live on a fixed income that doesn't even begin to keep up with inflation. And there are many others, through no fault of their own, who are either out of work or working several part time jobs to keep food on their table and a roof over their heads.  Unlike those who stand in line looking for handouts.

My father was one of those who worked hard to take care of an invalid wife and three kids. He worked a full time day job, cleaned office buildings at night and fed turkeys and cleaned huge turkey barns on weekends.  He considered any kind of handout to be shameful.

I am proud to be that man's daughter.

I could say that the price of gas doesn't affect me because I no longer own a car. That would be wrong. Fuel runs the ships that bring goods to our shores. Diesel runs the trucks and trains that transport goods to store shelves. It also runs the farm equipment that is used to grow our food. Fuel prices affect us all.

Those of us who rent are finding increases now or in the near future. My rent is going up in July. I can afford the increase, but many who have kids at home are really struggling.

A few months ago my two week grocery bill was on the average $120. That included buying items for my preparedness food pantry. Last week the bill for a similar order was $240. I live alone. I prepare for my family, but doubt if I could feed my four children were they younger and still living at home.

Because I live a very frugal lifestyle, I can still manage. Many can not. And don't think for one little bitty minute that your government gives a rodent's behind that many are suffering. They would rather send billions of dollars to fight a war we are not involved in. They would rather send pallets of baby formula to our southern border for the illegals when our people find bare shelves in our stores. They would rather vote to kill unborn babies than to take care of those already here and hurting.

I don't know how to stop those power hungry, evil people who are hell bent on destroying this country and it's people. In my world, there are consequences for actions. That doesn't seem to be the case in their world. “Rules for thee but not for me.”

What I do have is faith. I believe that even if those horrible people don't get what they so richly deserve in this lifetime, they most certainly will in the hereafter.

I can not sort it out. But God can.

You think this is all about abortion?

If you pay attention to history at all, you can see where this insanity is headed.

Pray.  Prepare.  And pray some more.

Blogger has fixed “Comments” even though it was not broken. Sigh.

Now at the top of the white space are the words “Comment as:” followed by a drop down of choices. Pick one.

Next are the words “Enter Comment.” Type in what you want to say and then click "Publish.”

I have no idea why it was necessary to change what was working well, but there it is. I hope this helps those who have something to say.  Half the fun for me with this blog is reading what you all have to say.  I have learned more from your comments than you have ever learned from me.

Thanks for your patience. I fear mine is close to running out!

Necessity is the Mother of Invention

My preferred way of preserving most foods is by canning. But the store here hasn't had canning jars on the shelves for several weeks. I did score 6 boxes of canning lids a couple of weeks ago, but those, too, are scarce as hen's teeth. Since I am nearly out of jars, having only 4 cases of half pint jars left in my stash, I spent part of the weekend looking for alternative ways to store food.

First, I claim none of what follows as my own ideas. Many others who are smarter than I am about these things have been my inspiration. I have added links to three of the videos that showed me how to do what I had in mind to do.

Note: The third link is to a video from “The Purposeful Pantry.” Darcy is my favorite dehydrating guru and I highly recommend her channel.

I have canned many 'meals in a jar,' consisting of soups and stews. But now that canning jars are so scarce in my area, and because I have lots of dehydrated food on hand, I have decided to see what I could do with putting together meals using dry ingredients. Instead of storing the mixes in jars, I am using ziploc freezer bags.

I know there are many prepackaged meals on the store shelves. And I do have some of those in my food storage. But things have changed. Much of that kind of packaged food is beyond my pay grade these days. With inflation headed skyward, I find it more important than ever to closely watch my expenditures. Especially because I am experiencing what many are experiencing and that is increases in rent and utilities.

So I am going through my recipe collection to find recipes I know my family likes that I can put together and store for future use. I don't dehydrate meat like some do, but prefer to add a jar of canned meat if needed for a recipe.

Here are the links. I hope they serve as an inspiration for just another way to be prepared.