David emailed me some more pictures of his garden this past week.  It seems that although we have been complaining about the heat, his plants love it.  So much so that the radishes were becoming overgrown with other plants and had to be pulled. 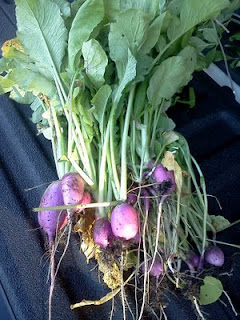 He said that the wind had sort of flattened some of the tomatoes, but they are doing well in their new tomato cages.  I still have dibs on some cherry tomatoes! 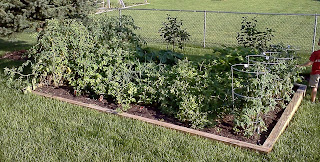 The corn along side the back of the house - that same corn that I said would never grow in that spot - has made a liar out of me.  I'm thinking that if you listen really closely, you can probably hear it grow - it has grown that fast.  It hasn't set on ears yet, but I expect at the rate it is growing, it will soon. 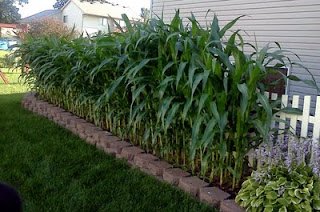 And then there is the gratuitous cute grandkid picture!  Can't leave that one out. 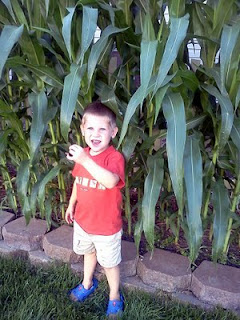 I think the kids are enjoying the garden as much as their dad is.  And I am glad to see David's family growing some of their own food.  It is so much better than store-bought.  I hope his garden gives them as much pleasure and mine did for so many years.
Posted by Vicki at Saturday, July 23, 2011 No comments:

Last evening David called and told me to check my email.  He had sent me pictures of his gardening efforts.  I think they look pretty darned good. 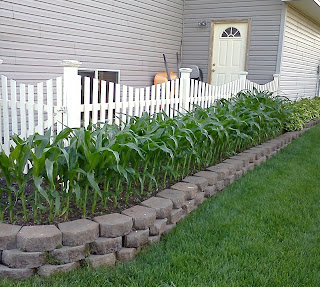 He has sweet corn growing along side the fence in back of his house.  When he planted corn there last year, I laughed at him because I thought the corn would never amount to anything in that location.  I wound up eating some crow, as he had enough to use in canning salsa, as many meals of corn on the cob as his family wanted and he even had enough to freeze. 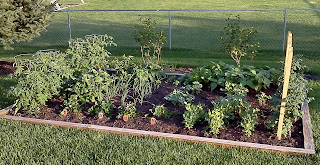 This spring he put in this raised bed garden in his back yard.  I am impressed at how well everything is growing.  He has a couple of different kinds of tomatoes, some potatoes, onions, peppers and strawberries along with some other things that I can't remember.  I have dibs on some cherry tomatoes.  There is very little on this earth better tasting than homegrown tomatoes.

There are some YouTube channels that I follow, having to do with food preservation and gardening.  One of these has videos by a lady in Virginia, who posts a wealth of information.  One of her videos is about her raised bed garden.  (See her video Here.)  I had not heard about this trend until David told me what he was doing.  Since then I have found that this seems to be a growing trend.  When David told me about all of the plants he has in his garden, he remarked that maybe he had crammed too much in the space, but it seems that this isn't a problem.  He was able to get much more in that space than if everything was planted in rows.  Makes sense to me.

I wonder why more people don't have back yard gardens any more.  I have seen only one vegetable garden in my neighborhood.  With rising prices at the grocery stores, it seems to me that growing your own produce is a really good idea.  I remember as a young girl, looking across all of the back yards in my block, there was not one yard that didn't have a garden.  The only problem with having a garden is that it spoils a person.  Store-bought vegetables just never taste as good as those that are home grown.

And if you don't have a back yard garden, you miss the opportunity of having great memories in later years.  Like sitting in the middle of the tomato patch with your Dad, salt shaker in hand, eating tomatoes off the vine until you just couldn't eat any more.  Memories like that!
Posted by Vicki at Friday, July 08, 2011 No comments: