Everywhere I look I see warnings about shortages. I'm not sure how much of that is true, but considering world wide conditions as well as our own problems here in the States, I am not willing to take a chance. I am stacking it as high as possible.

Canning supplies are still scarce across the country and nonexistent in my area of Minnesota. I still have enough supplies left for emergency canning.  If we should lose power for a lengthy period of time, I have enough to can most of the meat in the freezer. But for now, I am concentrating on dehydrating foods.

My last grocery delivery was this past Thursday. So far, 3 large heads of cabbage, 4 bunches of celery, and 8 lbs. of carrots have been dried. This morning I filled the dehydrator trays with 8 lbs. of onions.

I don't know what the future holds. But I do know it isn't looking too promising. Those in charge seem to be determined to turn our beloved nation into their version of a socialist utopia. They want us dependent on them for everything in our lives.

I can't do much about that, but I can delay begging the government for food to feed my family by continuing to put back as much as possible. At the very least, I have bought us some time to decide what to do next.

In talking with friends recently, I am finding that the constant attack on our freedoms is taking a toll.

I found the following video that describes what many of us are feeling.  It also gives us reasons to hope.

When the 24/7 News Barrage Leaves You Deeply Sad, How Do You Handle the Heartache? - YouTube

A friend once told me his family motto was “Illegitimi non carborundum.”  When I asked what it meant, he replied, “Don't let the bastards grind you down.”

The world has gone mad. Every day brings another insult to patriotic, peace loving people. It is enough to drive us over the edge.

So I thought I would share with you my antidote to the crazy. 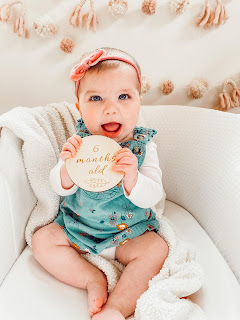 My Great-Granddaughter, Aspin. She is now 6 months old. She is sitting up all by herself. Except for when she moves and then she tips over. But I have no doubt that she will get the hang of it.

When the cares of the word seem too much to bear, this child makes it better. She always brings a smile to my face. I hope she does the same for you.

A friend who is really good at ferreting out information, sent me this link. It is an updated interview to the one I posted previously and includes information about the latest jab that has been released. I have included a link to the same video on the original website, should the first link be censored as so many links are that go against the narrative of the left.

My purpose is not to promote fear. There has been way too much of that already in our society this past year. Both sides of the story need to be told and that is not happening in main stream media. Each of us needs to look at both sides and decide for ourselves what we want to do next.

Me...I am staying as far away from the jab as possible. You make up your own mind.

And God help us all.

I confess to being a news junkie. Or perhaps I am just a nosy old biddie. Depends on your point of view.

I haven't owned a TV in years. I get my news from various internet sources. A few days ago I found it necessary to shut it all down. Aside from emails to friends and a movie in the evening, my computer remained shut off. I needed a break from watching our nation crumble before my eyes.

Do you remember freedom? I do. I remember when people could debate an issue without being labeled 'racist.' Now any opinion that differs from the agenda of the Left is automatically 'racist.' Sorry, Dr. Seuss.

Dr. King wished for us to be judged by our character, not the color of our skin. We were doing pretty well at that. But now we have taken a giant leap backwards When a company like Coca Cola holds meetings to teach employees how to be less white, I believe we have reached rock bottom.

There was a time when girls sports were for girls. Now some hairy chested man can say he identifies as a girl and can therefore not only compete in girls sports, but can also share showers and locker rooms with my granddaughter.

It goes on and on. Every day brings some new horror from our Capitol. It isn't enough that citizens are suffering due to a virus. The current resident of the White House and his handlers are busy wrecking lives with each pen stroke. Round and round it goes and where it stops, nobody knows.

I want my country back. I want my grands to know the freedom I had years ago. I want them to be able to think for themselves rather than being told what they should think. I want them to live their lives in peace without the constant chaos that now surrounds us. And I want them to know what truth sounds like, especially from media and politicians.

But most of all I want them to know how God had a hand in creating this great nation that so many are working so hard to destroy. I want them to see how things can change if we only allow God back into every aspect of our lives. For if that does not happen, they will surely see what a Godless nation looks like.

We are nearly there.

Canning jars and lids are still as scarce as hen's teeth around here, so my dehydrators have been working overtime.

I got 4 large bags of hash browns dried over the weekend along with 8 lbs. of carrots.

I tried something different with the carrots. I have lots of dehydrated diced and sliced carrots, but wanted some on hand that would be easy to use in baking carrot cake or muffins or bars. So I peeled the carrots, cut them into about 1 inch pieces and ran them through my food processor. The result was ground carrots that were about the same as coarse sand. Using the mesh liners, I spread the carrots out on 9 trays, keeping the thickness to about a quarter of an inch. At a temperature of 135 degrees, they dried in about 8 hours. I find they rehydrate quickly in boiling water and should work well in baked goods.

I wish I were one of those people who could keep a kitchen clean while working on a project, but sadly, I am not. Today will be spent finding the top of my kitchen table and the counter space so that I can dehydrate 10 lbs. of potato slices tomorrow.

Apartment dwellers seem to be always hunting for space for our food and supply storage. I have a rather large overflow of dehydrated vegetables and nowhere to store them. I think I have found a solution.

A while back I experimented with turning some of my dried veggies into powders. I ran dried celery, carrots, bell peppers and mixed veggies through my little coffee grinder. Since then I have found that I can add flavor to other foods just by adding a teaspoon or two of the vegetable powders. I still like the whole dried veggies for soups and stews, but the powders are handy for flavor without the need to rehydrate.  And the powders take up much less storage space. So I believe that is my next project.

I am eternally grateful that storage space is a problem instead of not having enough food. Finding storage space for food is a first world problem, but necessary as we dive headlong toward third world status.