A Month of Sundays

While doing my little stint at the computer this morning, I realized that it has been a month of Sundays since I last blogged.  Well, OK.  Maybe not quite that long.  But it has been a while.

I tend to get sidetracked.  A lot.  Especially if I have a new toy to play with.  I have been dehydrating veggies.  Cub had a sale on frozen veggies, which work really well in the dehydrator.  Just open the bags, spread them on the trays and let them dry.  I tried some shredded cabbage, too.  I like cabbage in soup, and that worked really well.  I also dried 10 lbs. of onions.  I use lots of dry onions, and they turned out great.  The other day, I opened a jar of canned chicken broth and a jar of chicken, dumped them into the crock pot, tossed in a handful of each of the dried veggies and let it all cook.  All of the veggies rehydrated really well and that was some seriously good chicken veggie soup.

I also tried drying a variety of fruit.  The strawberries turned out OK as did the mandarin oranges.  The oranges are a good snack.  But I wasn't thrilled with any of the other fruit, so I probably won't be drying much of that.  Maybe enough to chop up and use in muffins or quick breads.  I haven't tried apples yet.  They might turn out fine.  We shall see.

I have another new kitchen toy that I have been playing with.  When I got my new dehydrator, at the same time I got a jar sealer attachment for my Foodsaver.  That is the neatest little gadget since the invention of the bread slicer.  I wasn't happy with using plastic bags for storing my dried stuff.  Little creepy crawlers can get into Ziploc bags.  I know this because I had to toss out a bag of wheat flour that I had in a plastic bag.  So I put all of my extra dry stuff into glass jars and vac sealed them.  When I use the veggies, I just pop the lid, take out the amount I want to use, and reseal the jar.  Cool.  The dollar store had brown sugar for a buck a bag, so I bought some and sealed that in quart jars and stashed it in the pantry.  It stays soft and I don't wind up with brown sugar rocks.  I love it! 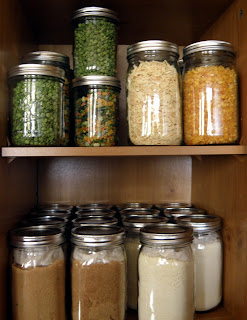 Then there was the sale at Joann's.  Flannel for $2.50 a yard.  That's less than half of the normal price.  I am in need of blankets.  I am not fond of blankets from the local big box stores.  I really like quilts.  Especially warm, snugly handmade quilts.  So I bought enough flannel for three new quilts.  These are not fancy, but are more utilitarian.  There were lots of little kid prints and not much of a selection of other styles, so I went for bright and happy as opposed to beautiful. 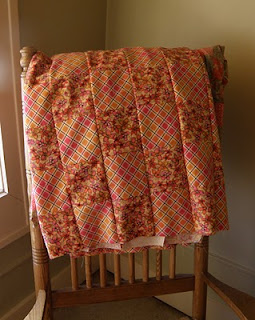 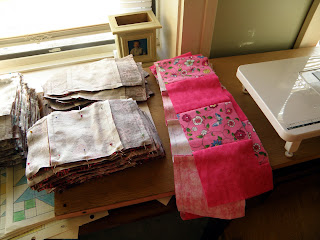 This orange quilt top is done and the other two are in various stages of completion.  I expect that winter will be nearly over by the time I get the backs and batting put together with the tops, but that is OK.  I will be all snugly warm when next winter comes blowing in on us.

So that's what I have been up to for my Month of Sundays.  Pretty tame stuff compared to your lives, but it works for me.
Posted by Vicki at Wednesday, March 02, 2011