I believe I am nearly at the end of my food preservation marathon using the goodies from the Farmer's Market.  I still had apples left to dehydrate and I finished those today.  This is just part of the 60 lbs. of apples.  I used about 10 pounds earlier - froze 4 quarts, made me a bowl of fried apples and a pan of apple crisp.  Tasted so good.  Sorry, but I didn't save any for you.  It was just too delicious.  Didn't even last long enough for a picture.

I had already dried a couple of dehydrator loads of apples when this picture was taken. 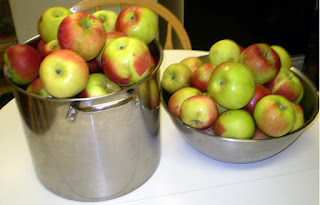 All total, I got 15 quarts of dried apple slices. 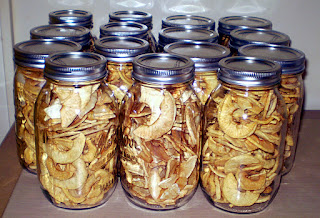 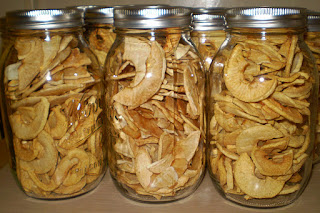 I tried vac sealing them in bags, but they tended to break into small pieces, so I put them in quart jars as I wanted slices to use in pies, apple crisp and other apple desserts.  A few weeks ago I canned a bunch of applesauce and 7 quarts of apple pie filling.  I will probably do that again next year, but I really like the dried apples.  They are so versatile and take up much less space than the canned.

When Duane and Becky brought me this last load of fruit and veggies they also brought me a surprise.  The Saturday that I had gone with them to the Farmer's Market I saw something that I really, really love.  Something that I hadn't had for a very long time.  Something that I used to buy from a farmer I knew when we lived up north.  But I had already come close to wrecking my budget so decided I had better not spend the money, although it was way less expensive than in the stores.  This was my surprise. 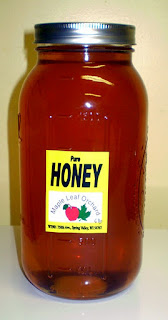 Yep.  A half-gallon jar of real, honest-to-goodness, pure honey.  The last time I bought a tiny little bottle of honey at the grocery, I was dismayed to find that it didn't taste at all like the honey I remembered.  After reading the label, I knew why.  It was thinned out with corn syrup.  Yuck!  Not this stuff.  It is liquid gold.  That night I just had to make biscuits so I could have them with honey.  Last night I made cornbread for the same reason.  It is wonderful!  Thank you for such a nice surprise.

So now all I have left to finish up is the rest of the 50 lb. box of potatoes.  Ten pounds went into the dehydrator this afternoon and there are about another 20 pounds waiting to be dried.  Then I think I am done for a while.  It seems like a lot of work, but it is well worth it, especially come winter time when I don't like going outdoors all that much, especially to grocery shop.

While I was in the middle of all of this cooking and peeling and blanching and canning, I couldn't help but remember how much of this kind of thing I had done when I wasn't much older than Boston and Maddie.  By that time, Mother was losing the use of her hands.  The arthritis in her joints was just too painful for her to do the work involved.  So as the oldest child, I was the only one old enough to help her preserve food for the winter.  Back then it wasn't just a trendy thing to do as it seems to be now.  It was a way of life.  It was the way we made sure that the family would be fed until the garden produce was ready the next season.  I remember that I wasn't very happy about spending so much time in the kitchen doing pretty much what I have been doing here lately.  I wanted to be outside playing.  Or in my room reading a book.  Or any of a dozen other things.  Anything but peeling apples and canning green beans.  But I find now that I am grateful to my Mother for having taught me not only how to make things like jam and relish and canned vegetables, but for also teaching me the importance of doing it.  I remember once complaining about all of the work involved and asking her why we had to do so much in the late summer and fall of the year.  She told me that I should look around me.  There were ants hauling off food into their ant hills for the winter.  There were squirrels stashing away acorns for the winter.  The farmers had put hay in their barns to feed their livestock for the winter.  She said that if we wanted to eat through the winter, a little hard work now was the way to do it.  She was right.
Posted by Vicki at Friday, October 28, 2011