Fruits of Their Labor


Yesterday I got another of those phone calls I love so much.

"Grandma, we emailed you a picture!" 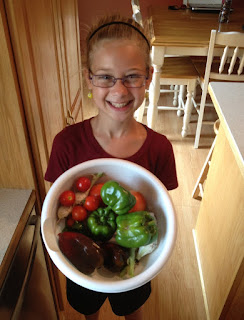 Boston told me all about picking fresh vegetables from their garden and that her Dad was making stir-fry with them for supper.  She told me how well the garden was doing and about how the tomato plants had fruit on them and how the kids had been helping Dad in the garden.  I am amazed that with the heat wave we have going on here, the plants haven't just burned up.  They must be doing something right.

I am so glad that my grandkids are learning that vegetables are grown in the ground and don't just appear on store shelves in cans or wrapped in plastic.  I am reminded of a story told by a member of a home canning email group I belong to.  This fellow raises a big garden every year and sells at a Farmer's Market in his area.  He said that a woman was looking at the potatoes he had dug the night before, which had a little dirt left on them.  She complained about the dirt and when her small daughter asked why the potatoes were dirty, the mother told her that they shouldn't be, because everybody knows that potatoes grow on trees.

After talking to Boston, Jacob took the phone.  He told me all about the bunny that was trying to eat their green pepper plants, but he chased the bunny away and he didn't know where the bunny went, but he chased it away from the peppers and it ran away so it won't eat any more peppers!

They promised to save a few cherry tomatoes for me.  I'm gonna hold them to that promise!