This morning I spent a little time with Youngest Son.  When we are together, part of our conversation is always about his three children - my beautiful grandchildren.  This morning we talked mostly about the youngest, Jacob. 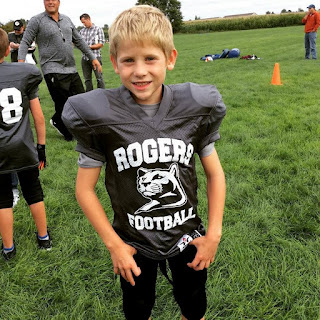 Jacob played football this summer.  At the end of their season there was a tournament involving several teams.  Jacob's team lost their first game and won their second.

When the last game had been played a table was set up.  On the table were the awards of trophies and ribbons.  Jacob asked his coach which of the awards were his.  His coach kindly told him that those
awards were for the team that won the tournament.

I am impressed that my grandson didn't stomp or cry or make a fuss because he didn't get a trophy.  The credit for this belongs in two places.

First, he had a coach that doesn't believe in rewards for just showing up.  If the kids want a trophy they have to work for it.  They have to pay attention and learn the game and learn teamwork and practice.  They are kids, so it should be fun as well.  But the winner of the tournament gets the trophy.

Second, and most important, he has two parents who both have excellent work ethics.  They have taught all of their kids that if you want something, you need to work for it.  Jacob has learned that lesson in the sports he loves.  His sisters have learned that their dance and gymnastics earn rewards through hours of hard work and practice.

Oh, there are the occasional treats - an ice cream on the way home - a night out to a ball game with Mom and Dad - time spent with family. 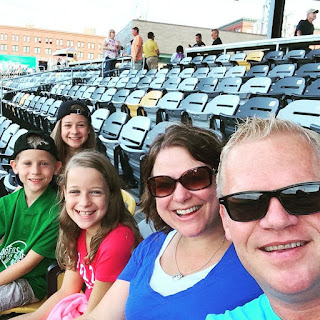 All three children earn every penny of their allowances.  There is no payment for just being there.  As my son put it this morning, "There aren't going to be any trophies for just showing up at a job.  They will be expected to earn their salaries when they grow up."  I heartily agree with him.  As adults there will be nobody who will pat them on the head and tell them how wonderful they are for just showing up and participating.  These people who hand out rewards for just participating are creating a false atmosphere of fairness.  They think that it is not fair that some kids don't get the trophies or ribbons.  But as Son put it, "Nobody ever said that life was fair.  If the kids who do what is expected of them get the same rewards as those who don't, then why should they bother.  Then there is no incentive to work hard and do better."

And that gives me hope for the future.
Posted by Vicki at Wednesday, August 26, 2015