My Dad loved to grow things.  He lovingly tended his gardens for many years.  And when he could no longer garden, he planted tomatoes in pots on the balcony of his apartment.

One fall he found that a tomato plant had not yet died off as had the others, so when the nights became colder, he brought it indoors.  He continued to water it and it continued to grow.

Dad lived in a town of about 600 people, not ten miles from where he was born.  Everyone knew everyone else.  Knowing Dad, I suspect that he did just a little bit of bragging on his tall tomato plant.  Probably showed it off to some of his friends and relatives who lived in the same Senior apartment building.

Word got around and one afternoon a reporter from the local weekly newspaper came knocking on his door.  An interview was given and pictures were taken.  And Dad and his tomato plant had their 15 minutes of fame the following week when the paper was published.

Some years later I inherited a box full of family pictures.  While sorting them out, I found this one. 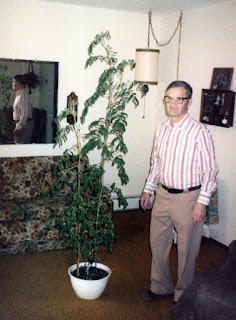 That's Dad.  That's the famous tomato plant.  Dad was 5' 5" tall so the plant might look taller than it was.  I looked at the distance between the top of the plant and his living room ceiling.  Looks to be about a foot.  After this photo was taken, the silly plant continued to grow until it touched the ceiling.

We always teased him that it must have been a slow news week when the article appeared in the newspaper.  He just smiled and remarked that he knew of nobody else who had grown a 7 foot tall tomato plant.