I love my home state of Minnesota.  It is a beautiful state, from the rolling farmlands in the southern and central parts of the state to the pine forests of the north, to its '10,000 lakes.'  It is true that winters are interesting with occasional blizzards and massive snowfalls, but if you have ever walked through woods so quiet you can hear the snowflakes touch the ground, you will understand true beauty.  I have sat on the deck of my brother's home and watched a small black bear up a tree on the other side of his driveway.  I have watched yearling fawns running and jumping and playing in the first snowfall of the year.  I have heard the haunting songs of the loons calling to one another across the waters of some of the most beautiful lakes anywhere.  I have spent hours, rod and reel in hand, catching the best tasting fresh water fish.

You may have heard the term 'Minnesota Nice.'  If you get away from the hustle and bustle of the cities, you will find it in abundance.  The people are for the most part, friendly.  Neighbors help neighbors.  They get together for summer barbecues and winter snowmobile rides.  People you don't know will wave in passing.  They will go out of their way to help someone in need.

There are good folks living in the cities, but sadly, the political climate is decidedly left leaning, complete with the current Trump Derangement Syndrome.  President Trump is holding a rally in Minneapolis this week.  The mayor of Minneapolis has decreed that police officers appearing at the rally are not allowed to wear their uniforms even though officers have traditionally been at events in uniform.  He has also decided to charge the Trump campaign way more for security than has ever been charged for an event before.  The hope was that Trump would cancel the rally.  The mayor obviously doesn't understand the concept of 'fighting back.'

He also doesn't understand what it does to morale when officers are told they can not wear a uniform they are proud to wear.  So the officers in the Minneapolis Police Department fought back and they designed this: 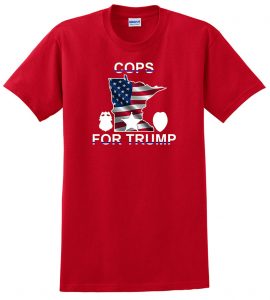 The officers will be wearing this shirt to the rally.  They have offered it for sale on their website.  (Note:  When I tried to post a link to the MPD Federation website, I found a notice that the website has been suspended.  I don't know if that is just temporary or permanent.  Odd, that.).    All proceeds go to charity.  A spokesman for the Department said in an interview that they would like to flood the audience with red shirts.

My goal here is not to sell t-shirts.  I have no connection to this effort.  But I do love the fact that these police officers, who put their lives on the line for us every single day, have decided to fight back against tyrannical politicians.  God bless them for having the courage of their convictions.  If more of us did what we could to fight back against those who would try to take our freedoms from us, we might not be so close to losing them to those who think they know better than we do how we should live our lives.
Posted by Vicki at Tuesday, October 08, 2019