Some time ago my oldest son ordered an electric bike.  Duane says it looks like something out of a Batman movie, so he calls it the 'Bat Bike.' 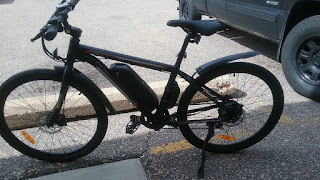 Due to shipping delays, it finally arrived this week.  It is painted a flat black color and has a removable battery pack that can be recharged.  Information on this kind of bike can be found by searching 'ecotric'.

The bike required some assembly  The owner of the local bike shop put the seat and handle bars on it and checked it out.  It was good to go.

Duane did a test ride to the Target store about two miles away, where he bought a backpack to hold necessities for mostly fishing expeditions.The bike performed perfectly.

On his way home, Duane passed the Sheriff's office that is close by his apartment.  There were three deputies outside and they called Duane over.  Turns out none of them had ever seen a Bat Bike before and were curious about it.  Duane showed them the bike and explained how his stroke had left him unable to drive a car.  The numbness in one of his legs makes riding a regular bike difficult, so he found the Bat Bike online and thought it might be the answer to his transportation problems.  The battery takes over so pedaling is unnecessary.

One of the deputies asked if he could take the bike for a spin around the block and Duane said he could.  Duane had a good test run and a nice conversation with the local law.

But all cops are supposed to be bad - at least that is what we are expected to believe.  I guess our local sheriff deputies didn't get that memo.