I have already owned up to spoiling my dogs.  But sometimes a pet has earned the right to be a wee bit spoiled.  Both of mine spent the first seven years of their lives living in kennels with wire mesh runs, and having litters of puppies.  So if I spoil them, it is OK.  They earned it.  The spoiling includes making homemade dog food for them.

Now, there is a method to my madness.  When I first got Jessie, she wouldn't eat anything that I gave her.  I tried several brands of dry dog food.  She wouldn't touch any of it.  Then came the various and assorted brands of canned food.  When I finally found one that she would reluctantly eat, it made her sick.  That nasty stuff is tough to clean out of carpeting.

So finally in desperation, I called her previous owner and asked what she fed her dogs.  I mean, Jessie is just little and it doesn't take long for a little dog to lose weight and become dehydrated.  It wasn't looking good.  Turns out they were raised on homemade dog food, which consists mostly of chicken breast, vegetables and rice.  So I adapted her recipe to use less expensive meat, which lately has been hamburger that has been on sale.  Worked like a charm.  Now she is getting just a little bit tubby, so I have to cut back some.  Lily dives right in and loves it, too.  Problem solved.

When I make this concoction, I make a whole pot load at once, package it into sandwich bags and freeze it.  I can do two or three months worth this way.  Turns out, it is a whole lot cheaper than processed dog food and, according to my vet, is better for them.  The last time I was in the middle of mixing this stuff up, consisting of browned hamburger, rice, green beans and sliced carrots, my landlord stopped by to fix  a faucet that was leaking.  He stood in the kitchen talking with me for a time, and then finally asked me what I was making.  He said that it smelled pretty good.  When I told him that it was dog food, he just laughed.  He said that he thought I was mixing up a huge hot dish for a church supper. 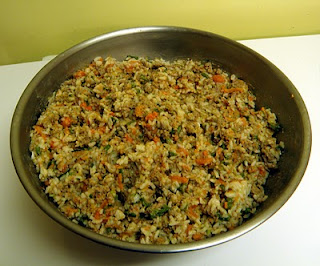 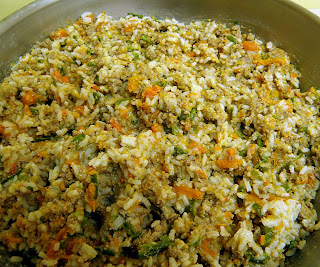 I guess he wasn't that far off the mark.  Throw in a couple of cans of cream of mushroom soup, a few handfuls of french fried onions on top, and I could probably get away with it.  I'm guessing that I won't be asked to bring a hot dish to any of our family get-togethers any time soon.
Posted by Vicki at Wednesday, October 06, 2010