The one I like most is "Stuffing in a Bag."  I found it on the "Chickens In The Road" blog, which is one of my favorite places to find recipes.  I tried a couple other recipes for this Stove Top Stuffing-like mix.  Some of the other recipes called for mixing vast amounts of dry bread crumbs with the seasonings, storing it all in a large air-tight container, and then dipping out the correct amount for each serving.  I found that the seasonings tend to be unevenly distributed with that method.  But this recipe calls for making the recipe in individual servings which allows for the right amount of seasonings in each bag.  And it is really good.  Jeri stopped by the other evening while I was eating supper, which included this stuffing, and when she tasted it, she said that she thought it tasted better than the store bought stuffing.

Here is the recipe:

Directions
Combine everything in a zip lock bag.  Seal and store in a cool place.

Directions for cooking:
Bring 1-1/2 cups water and 1/4 cup butter to boil in a saucepan. Stir in contents of bag; cover. Remove from heat. Let stand for 5 min. Fluff with fork.
Or you can place the contents of the bag in a microwave-safe bowl, Add the water and stir, and then cut the butter over the top and microwave for 7 minutes.  Fluff with a fork. 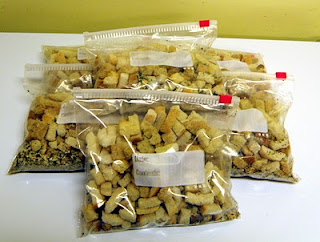 I like this stuffing baked over skinless, boneless chicken breast or tenders.  Just bake the chicken, and cover with the cooked stuffing for the last 10 minutes of baking.  Add a veggie or salad, and it makes a quick, delicious meal. 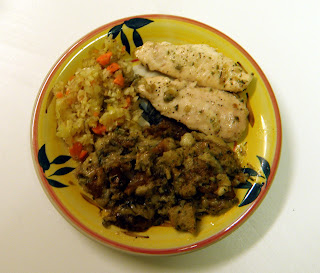 I have collected a number of these do-it-yourself mix recipes, and am having fun trying them out.  I like the idea of spending mere pennies for something that tastes better than the equivalent in stores.  Appeals to my simple lifestyle and my sense of cheap!  I think I will try my recipe for Onion Soup Mix next.
Posted by Vicki at Sunday, October 17, 2010