First Snow of the Season

David called me last week after the snowfall we got on Saturday.  He said that he was watching his kids who were outside making a snowman.  He said that they were really having a good time playing in the snow. 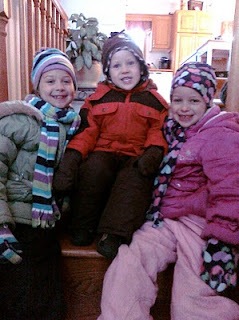 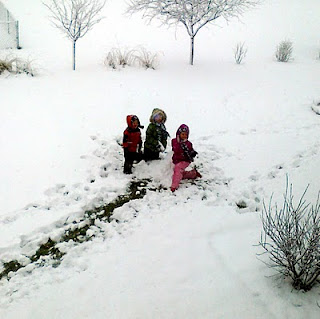 This so reminds me of a happy memory.

I have no idea why this particular memory stays with me.  I clearly recall a day when we lived in the old house on the Eddy farm.  The weather was fairly warm for winter.  The wind was calm.  It started, early in the morning, to snow.  And it kept on snowing.  Those huge flakes of snow that are so beautiful to watch.  Just floating to the ground.  By early afternoon the yard was covered with lots of snow.  Just right for snowman building.  I couldn't stand it any longer, so I bundled my kids up in warm clothes and outside we went.  We built a huge snowman.  The kids were rolling snowballs and making snow angels in the fresh snow.  Ted the dog was running and jumping and burying his head in the snow.  We had so much fun that day, topped off with hot chocolate when we finally went back indoors.

These days when my memory is sometimes hazy, I love it when I can see a day like that with my children so clearly in my mind.
Posted by Vicki at Thursday, November 18, 2010