My phone rang this evening.  It was Youngest Son.  The first thing he said was, "Do you know what I do when my day has been really hectic and I know I'm supposed to be somewhere doing something and I'm not sure anymore what the something is?"  I can play straight man, so I said I didn't know.  Tell me.  He said, "Well, I just stop and take time to read Mom's blog."  Says it calms him down and gives him a break.  Aww!  Bless his heart.

David said he was on his way to the grocery store.  He said that they were out of salami at his house for Jacob's sack lunch for school tomorrow.  Jacob's world will end if he doesn't have a salami and cheese sandwich in his lunch bag.  Jacob is six.  Salami and cheese sandwiches are important when you are six.  I asked him if the elementary school his kids attend was on Michelle Obama's handy dandy lunch program with it's rules and regulations.  He said it was.  Which is why he was on his way to the store for salami.  His kids would much rather take their own lunch than eat the government regulated school lunch.  Smart kids.

Jacob wanted to join the Boy Scouts.  A couple of his friends from school are in the Scouting program.  So David took his son to a meeting to see if Jacob would like it.  He did.  I now am the proud grandma of a Cub Scout.  He earned his first badge by learning the Scout Pledge.  He is so proud of that badge and of his new uniform. 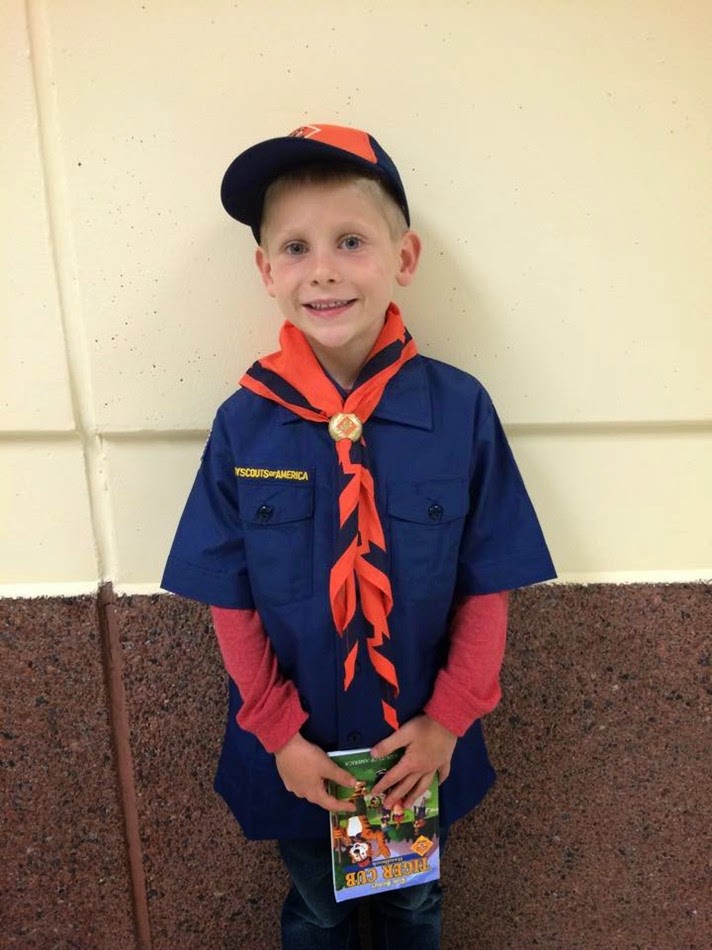 I hope he sticks with Scouting for a while.  David said he didn't know if he had an Eagle Scout in the making or not, but for now, Jacob was enjoying  Scouting and learning new things, and that was what was important.

I just love these phone calls.  David's truck is equipped with one of those "hands free" phone things, so he often calls when he is on his way somewhere or on his way home from somewhere.  I tease him that his kids will keep me in material for blog posts for years to come.  He just laughs at me.  And says I am probably right!  Whether that is true or not, I am blessed to have kids who stay in touch, even when their lives are hectic.  I'm glad they call.  I'm glad they tell me about salami and cheese sandwiches.  And about my little Cub Scout.  And anything else that is on their minds.  May that never change.
Posted by Vicki at Tuesday, October 14, 2014