This morning I read a post over at Gorges' Grouse.  Gorges is good at writing interesting articles about times past.  This one was about a barn in his neighborhood that recently burned, and his memories of many years associated with that building.  It brought to mind a building in my memory that suffered a similar fate.

When my grandfather homesteaded his land in northern Minnesota, there were no schools in his neighborhood.  The closest school was in the small town several miles from their farm, and in the early 1900's, there were no school buses that would transport his growing family of children to school.  I suppose my grandmother could have taught them at home, but I am fairly sure that raising her nine children in addition to all the other chores on the farm that needed her attention took up nearly all of her time.  She prepared the meals, baked bread in the oven of a wood burning stove, planted a garden, preserved every bit of food she could, cared for the chickens, washed clothes in a washtub with water from the pump outside the house, heated on her stove.  And in her spare time, she mended their clothes and sewed shirts and dresses for her children.  Not much time to spend on lesson plans.

So my grandfather got together with some of his neighbors and they built a one room schoolhouse about a quarter mile from his farm.  By the time my Dad, the youngest of the children, was ready for school in about 1917, his oldest sister had her teaching certificate and was his teacher.  Dad once told me that having his sister as his teacher sort of put a crimp in the shenanigans he could get away with.  Dad was big on shenanigans.  His sister was big on threatening to tell their father.

That school stood for many years, even after the rural kids started going to school in town.  It was used as a town hall and for neighborhood get-togethers.  Many times over the years I visited that school.  And every time I looked at my Dad's initials carved in one of the boards that served as siding. This was done when he was about 10 years old.

And then one night just a few years ago, some boneheaded fool decided to burn down the schoolhouse, just for fun.  That idiot took away part of my family history.  I guess I shouldn't have been surprised, for anyone who would burn a schoolhouse just because they have nothing better to do wouldn't care about hurting the people to whom that building had meaning and memories attached to it.

Like Gorges, I never took a photo of the building that held memories for me.  The building is gone but the memories linger.  Listening to Dad tell stories about his school days.  Running my fingers over the initials carved so long ago on the side of the school.  Nobody can take that away from me.

I do have one picture from that period of time. 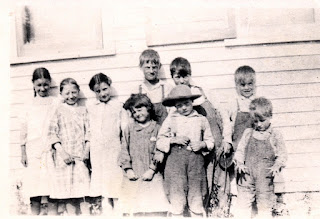 The three boys in the back are Dad's brothers, Keith, Kenneth and Bruce.  The dark haired smallest girl in front is Dad's sister, Clarice.  Dad is on the end, the one studiously studying his hands.

The children are standing by the schoolhouse.   That is the closest thing to a picture of the school I have.  And when it comes right down to it, that picture of my Dad and his siblings is far more precious to me than any building.