When I was between the ages of 5 and 9, my family lived in town.  One of the things that kept kids in my neighborhood busy in the summer was roller skating.  Now, we aren't talking fancy rollerblades.  This is what we had. 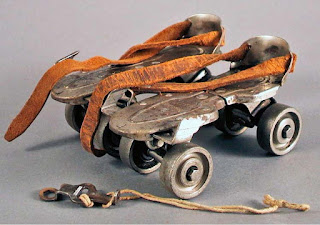 That key at the bottom of the picture was used to tighten the toe clamps on the skates.  Every kid I knew had a skate key on a string around their neck whether they were skating that day or not.  It was sort of a 1950's fashion statement among the kiddie crowd.

You put your feet on the skates, buckled the leather straps around your ankles and tightened the clamps.  You learned quickly to wear hard soled leather shoes for skating.  Skates clamped to sneakers soon raised some impressive blisters.

It took a while to get the hang of sidewalk rollerskating.  I think my knees had scabs on them all that first summer I skated.  When four or five kids got together to skate, you could hear us coming a block away.  The metal wheels were noisy on the sidewalk and each time you skated over a crack, a clickety clackity sound was heard.

There were two ways to negotiate the curb at the end of a block.  There were no wheelchair ramps then, so you either jumped off the curb or fell off.  You knew which method was used by the size of the scabs on the knees.

When I was about 10 years of age, my parents bought a big, old farmhouse on 20 acres of land.  One of the first things I did upon moving to the country was to join the local 4-H club.  To my delight I discovered that once in a while the club had a "Fun Night" and sometimes the fun included a 20 mile drive to the nearest roller rink.

None of the kids could afford shoe skates of their own, so skates like these were rented at the rink. 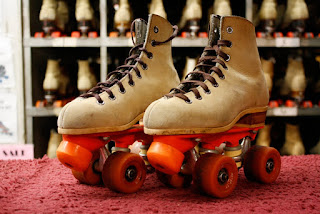 The roller rink where we skated had a floor about the size of a basketball court.  There were colored lights in the ceiling and one of those mirrored disco balls in the center.  Round and round and round we skated, trying not to run over the smaller kids and staying away from the better skaters.  I always wished I could skate backwards or do the dance steps, but I did pretty well as long as I kept moving forward.  To try to do anything fancy usually ended in disaster.

The 4-H club held a hayride on Halloween night.  We didn't go trick or treating.  The houses were just too far apart.  Everyone gathered at the two-room schoolhouse where the club meetings were held.  One of the local farmers arrived on his tractor, pulling a hayrack behind.  Hay had been spread over the bed of the hayrack and we all piled on.  A couple of the dads, armed with flashlights, came along to keep the older boys from becoming too rowdy, to keep the younger kids from falling off and to keep the older boys and girls from becoming too amorous in the dark. 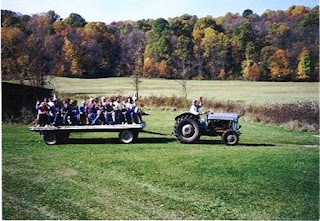 We rode for about an hour - up and down gravel roads and across fields and pastures.  Arriving back at the schoolhouse, there were games like bobbing for apples and pin the tail on the donkey.  The moms provided treats - hot apple cider - sandwiches - pumpkin cookies - brownies with orange colored frosting.  Each child took home a small bag of Halloween candy.

I suppose all that was pretty tame compared to the elaborate Halloween doings for kids today, but for a kid in the late 1950's and early 1960's, it was absolutely wonderful!
Posted by Vicki at Thursday, March 02, 2017