My Dad wasn't big in stature.  He claimed to be 5' 5" tall.  We all doubted it.  But even though his stature was on the small side, he was big in so many other ways.

When I was growing up, Dad often worked two and sometimes three jobs in order to take care of his family.  His main job was as a grain sampler for the State of Minnesota.  This job involved climbing into boxcars and taking samples of the grain in them, to be tested.  It was a hot, dirty job in the heat of the summer and a cold dirty job in the middle of winter.  I never once heard him complain.  He often took side jobs to make ends meet.  He fed and watered turkeys at a nearby turkey farm and cleaned our church and other buildings around town in the evenings.  He had a work ethic second to none.

When my mother needed special care due to arthritis, he took care of her and took over the household chores that she could no longer do.  As anyone who has ever taken care of someone who is chronically ill knows, this isn't always a pleasant task.  But he did it, every day, without a whimper or complaint.  I once asked him how he could do this, day after day.  His reply was, "I love your mother."  That was all the reason he needed.

Dad's life was not an easy one, even from the beginning.  He and his family lived on a farm in northern Minnesota.  He told of plowing fields behind a team of horses, of loading hay onto a hay wagon by pitchfork and of milking cows by hand.  He told these stories of his youth, not so anyone would feel sorry for him, but because he felt we would be interested in what life was like on a farm before tractors, combines and hay balers.  He talked of ice skating on the frozen lake near his family home, and of how one windy winter day, he held out his arms like wings and let the wind carry him to the other side of the lake.  Then he said he wished he had thought about how he was going to get back, against the strong wind, but that the struggle to skate back was worth the ride.

He told of using saws to cut huge blocks of ice from the lake in the winter and packing them in straw in the root cellar, for use in their ice box during the summer.  He told of hopping a freight train with some of his brothers to ride out to the Dakotas to work on grain thrashing crews in order to make a little money to help the family.  He told of going to Montana with his brother, Kenneth, to pick potatoes for the same reason.  Dad was never afraid of work and would do anything for the family.

Dad was always there for me.  It didn't matter what the problem was, he always had time to listen.  He was a soft touch for his kids, and I knew that if I could get to Dad first, I could usually do whatever it was that I wanted to do.  I took advantage of that like most kids do.  That doesn't mean that he didn't discipline.  He did.  But most times it was not wanting to disappoint my Dad that kept me out of most trouble.

Dad has been gone for quite some time now.  But I still catch myself thinking that I really need to call Dad and tell him about whatever is going on in my life at the moment and to joke with him about mailing me piece of his world famous apple pie.

I wish he were still there to answer that phone. 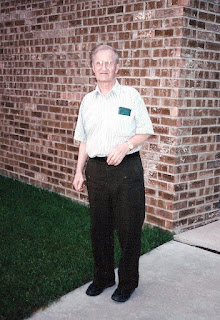