Is It Spring Yet?


The calendar says it is, but looking outside, I'm not so sure.  I saw a couple of snowflakes drift past my window earlier, and it looks like there may be some more of that nasty white stuff headed this way.  Mother Nature has a mean streak!

I can't complain too much.  Well, actually, I can, but it does no good, so why bother.  Yesterday was one of the nicest days I have seen in a while, so I took advantage of it and was out and about.

My local grocery had whole boneless hams on sale, as well as sausage, so I got some of each and canned it up today.  I wound up with 11 pints of ham cubes, which will be really good in ham and scalloped potato dishes, and 26 half pints of sausage.  Sausage gravy over homemade biscuits, here I come.  Love the sausage mixed with scrambled eggs and topped with a little cheese, too. 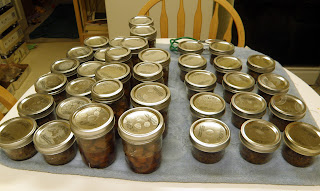 Tomorrow morning I'll remove the rings, wash the jars and label them.  Then onto the shelves they go until I get a craving for something delicious and homemade.

The Cub Foods store here has been recently carrying products different from what was offered in the past, and yesterday I saw something new.  They had large packages of sliced pepperoni for cheap, and as I like to make my own pizzas, it looked like a good deal.  I found that the packages included some chunks from the ends of pepperoni sticks, but that was fine with me.  I've got 10 half pint jars of pepperoni on my shelf now.  I probably wouldn't have thought about canning pepperoni if it weren't for Jackie Clay at Backwoods Home Magazine online.  She and her husband homestead north of Duluth, and some time back she wrote about canning pepperoni and other sausages of that type.  Following her instructions, I found that it worked well.  Using this pepperoni along with the pizza sauce I canned last summer, I can have pizza whenever I want, without paying to have it delivered.

Not much else going on here in my little apartment.  I thought about doing some serious spring cleaning, but so far it is in the planning stages.  I just can't get too excited about washing walls and cleaning cupboards until it is warm enough to have my windows open and have fresh air blowing through.  At the rate it is warming up here in Minnesota, we're looking at maybe July?
Posted by Vicki at Wednesday, April 17, 2013