Freezer Meals Experiment and a Surprise

Sometimes we need to find new ways of doing day to day chores.  Cooking is one of those things that has become a challenge.  You have heard me whine about not being able to stand for more than a few minutes at a time, and you have also heard me whine about being tethered to an oxygen machine (hereafter referred to as R2D2 of Star Wars fame).  So I need to find a way to prepare my meals that doesn't involve standing by the stove while constantly stirring and doesn't involve oxygen near an open flame.

One of the ideas I have decided to try is putting together simple meals that can be frozen and later thawed and cooked in a crock pot.  Most of the prep work can be done while sitting at my kitchen table and cooking the meals should be easy with the crock pot.

I ordered some of the ingredients that came with my grocery delivery today and much of the rest I already have in my pantry.  By the first part of next week I will do a post to let you know what I did and how it worked.

On another note, I had a really nice surprise today.  I have been thinking about buying one of these. 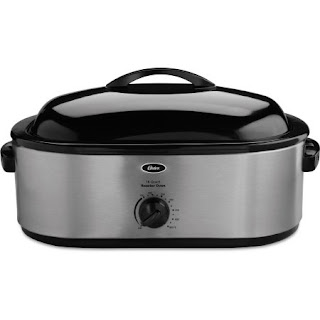 Lo and behold, that very one arrived at my door.  Duane said he hoped it would arrive closer to the day, but Happy early Mother's Day!

I have several large stainless steel stock pots.  They work really well for some things, but many times if the contents aren't stirred constantly or at least often, they will burn on the bottom of the pot.  Food in the roaster still needs stirring, but that can be done while sitting if the roaster is on my kitchen table and I won't need to worry about the oxygen going 'poof'.  I'm going to give it a test run later next week, making a pot of ham and beans.  I think I can get lots of ham and beans in a 22 quart roaster.  Thank you, son.

I'm off to get my recipes together and my spices out for the freezer meal experiment starting in the morning.  See you all next week.