A couple of posts back I mentioned that I had a new home health care nurse, Tatiana, who was born in Russia, immigrated here and became an American citizen.  On her first visit she noticed my shelves full of home canned food and remarked that many in Russia did home canning.  When she was here last Friday, I asked her more about the subject.

Tatiana told me that back in the old USSR, everybody canned everything they could find.  It was a matter of survival.  She said the grocery stores had very little in the way of food, canned or otherwise.  She remembers standing in line for over an hour to buy one loaf of bread.

Her mother used the old fashioned canning jars that had glass lids held down by stiff wire. 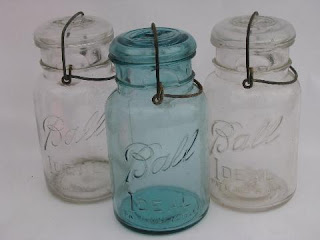 I asked if her mother used a pressure canner to process food.  Tatiana wasn't sure what a pressure canner was, so I showed her one of mine.  She said she hadn't ever seen one in Russia and that her mother used large kettles similar to my stock pot.  Food was boiled and ladled into the jars and the glass lids tightened down with the wire.  She  said much of the vegetables were preserved in a vinegar brine and they made lots of sauerkraut because it required only cabbage and salt, both of which could be had fairly easily.

I asked if her mother had ever canned meat and she said she had not heard of anyone doing that.  She was amazed at the variety of meats that may be canned.

Tatiana says that things are much better in Russia now.  The stores carry a large variety of foods and people don't spend nearly so much time standing in line.  Like here in the USA, home canning isn't done as much as it was years ago.  And like here, the Russians, especially in the cities, don't bother preserving food, but just get what they want at the stores.

I found it fascinating to compare how things are done in one part of the world to another.  If we kick the politics into a corner and just concentrate on the people, we may find we aren't so different after all.
Posted by Vicki at Sunday, September 23, 2018