I wonder how many folks can say that a board game evokes warm and fuzzy memories.  Well, this one does it for me. 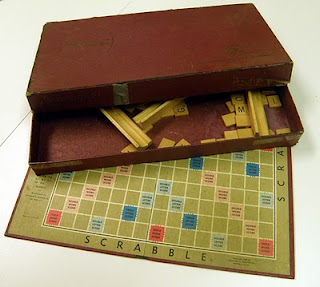 My parents retired to the area of their childhood homes in northern Minnesota.  That was good for them.  They had relatives living there as well as friends from when they were kids.  It is such a beautiful area with lakes and forest.  I often long to be there again.

The not so good thing for me was that I live about 250 miles south of that lovely country.  Oh, I went for visits from time to time, but not nearly as often as I would have liked.  The responsibilities of paying the rent and keeping food on the table prevented more trips to what I still consider paradise.

So I called them.  A lot.  If I couldn't see them as often as I would have liked, hearing their voices was the next best thing.  Mom had health issues that made talking on the phone difficult for her, so I mostly talked to my Dad.  He would tell me all about what had been going on in their lives and I would give him reports about their grandchildren and great-grandchildren.

About half the time when I asked Dad what they were doing, he would reply that he and Mom were playing Scrabble.  I would always ask him who was winning.  He would always reply that Mom was winning, and then he would add, "But she cheats."  And she would then hotly deny it.  I don't think either of them ever cheated at anything in their entire lives.

Mom has been gone now for fourteen years and Dad for nearly six.  Their Scrabble game has a place of honor in my little apartment.  Whenever I look at it, I smile, thinking of the many hours they wiled away playing the game and of the teasing way Dad always blamed his losses on Mom's cheating.