The headlines are grim.  The world is chaotic.  Senseless violence is on the upswing.  And politicians give a whole new meaning to the word corruption.  Sometimes I need to just back away before my head explodes.

So this weekend I did some work entering data into my genealogy program.  Part of that time was spent sorting through pictures, deciding which ones I wanted to add.  While doing that I found some that reminded me of the fun that happened when my parents and their siblings got together. 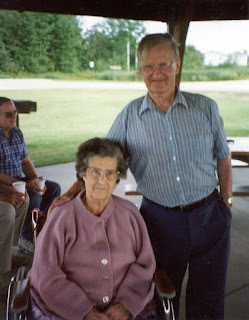 This is my Dad and his sister, Clarice.  There was a special bond between them that lasted over 90 years.  It began when they were children. 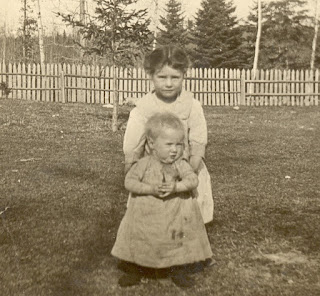 Close to the ends of their lives they both lived in the same nursing home in the small town not 10 miles from the farm where they grew up.  Clarice's memory went away and Dad's body wore out.  But their senses of humor remained intact.

My cousin told me this story about the brother and sister.  Both used wheelchairs.  Some days they, along with other residents, sat in their chairs and did exercises to help maintain upper body mobility.  Seated side by side they dutifully did the required exercises.  Until Dad would reach over and tap Clarice on the back of the head.  They would continue on until Clarice's arm would shoot out sideways, smacking Dad lightly on the shoulder.  This went on, both of them looking straight ahead, doing their level best to maintain a straight face.  Until the physical therapist said, "You two Matheny kids behave yourselves," and they would dissolve into laughter.

About 15 years ago Dad gave me a cardboard box of old family photos.  They weren't in albums but were just loose in the box.  I spent hours going through them, sorting and remembering.  While trying to bring the pictures to some sort of order, I found this. 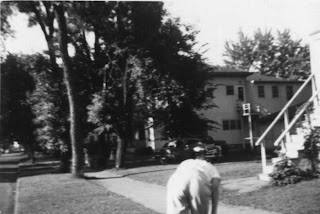 Curiosity got the best of me and I called Dad.  I explained that I had found a picture of somebodys backside.  I said I recognized the stairs in the photo as being the ones attached to my Grandma's house in St. Paul.  But I wanted to know about the picture.  Dad chuckled and then told me about it.

Dad and Mom grew up within 10 miles of each other.  Dad knew Mom's family all of his life.  He was always on good terms with Mom's brother and her five sisters.  On the day that photo was taken, Mom's sister Margaret was teasing Dad about something long since forgotten.  Dad, being Dad, could not let the teasing go unchallenged, so he countered with a smart remark of his own.  At this point Margaret proceeded to express her disdain of his remark.  And Dad snapped the picture.

After I was able to bring my own laughter under control, I asked Dad why on earth he had kept that photo for well over 50 years.  He said it reminded him of the fun that happened when they were all together.  Dad and Mother's family remained close for the rest of their lives.

This is a much better picture of Margaret! 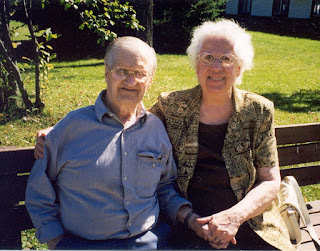 You might say that those of my parent's generation lived at a time when America was still America and their freedoms were still intact, so it must have been easier for them to laugh and have fun.  Really?

Those people lived through two world wars and at the end of the second one, they had all their illusions about humanity shattered with the news of the concentration camps in Europe.  There was hardly a family that escaped losing a loved one in the wars.  They lived through the Great Depression where people couldn't find work and where folks were lined up on city streets to get their only meal of the day at soup kitchens.  Their lives were no walk in the park.

One evening maybe 20 years ago I sat with my Dad on the balcony of his apartment, watching the sunset and enjoying the cool of the evening.  We had talked of many things, including the shenanigans of the children in his large family.  I asked him how it was that they could keep a sense of humor during such hard times.  He said humor was what kept them going.  If they could find something worth laughing about, it didn't change anything, but the cares of the world didn't seem quite so bad.

Dad was a pretty smart cookie.
Posted by Vicki at Monday, February 15, 2016