Mother's Day here in my little corner of the world was really fun.

Oldest daughter had stopped by the day before.  We talked for a time and she gave me an Amazon gift card (I love gift cards!), telling me she thought I might like some new books.  She was right.  I have been wanting a copy of the "Ball Complete Book of Home Preserving."  And while wandering around the Amazon website, I found another book on dehydrating that was on my wish list.  I believe I will order both of them this afternoon.

Youngest daughter called to wish me a Happy Mother's Day.  We chatted for a time and she brought me up to speed on what she and her kids had been doing.  Her kids were taking her out for dinner to celebrate the day.

Youngest Son called me on his way to my house, wanting to know what I would like for lunch.  Knowing that most restaurants would have waiting lines on Mother's Day, we decided on fast food.  Yes, I admit it.  Once in a while I like me a burger and fries that comes in a paper bag.  They went to Culver's and got me a Butter Burger.  I had never tried one and it was really good.  The kids were happy.  Grandma was happy.  Win, win!

After lunch the kids had a surprise for me.  I opened the gift bag to find these. 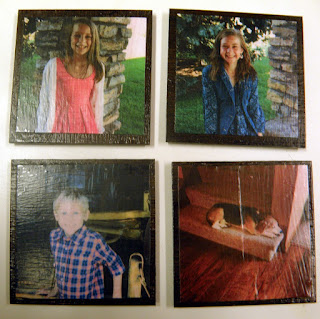 The picture doesn't do them justice.  Son had bought tiles at the home improvement store.  The kids attached the photos to the tiles and used Mod Podge to give them a nice finish.  The brush strokes made them look almost like paintings.  Although Charlie the Beagle had passed on to his reward earlier this year, they include a picture of him because I always said that family included three grandchildren and a grandpuppy!  They attached magnets to the back of the tiles and now I have these smiling faces on my refrigerator to look at whenever I am in my kitchen.

We sat and talked for quite a while.  The kids filled me in on what they had been doing.  One is continuing in Dance and the other has decided to leave the dancing and go for gymnastics.  The youngest is happy to be playing whatever sport is in season.  We talked for a time about the naughty things my kids had done when they were young.  Now I know who shot the BB gun, putting a neat, round hole in my sliding glass door!

Often I have seen families who are so busy with their cell phones that they don't really talk to one another.  Here, there wasn't a cell phone in sight.  I know they use them, particularly my son who uses his for work and to keep track of which kid needs to be taken to and picked up from which activity, but they also know when to put them away and as a result, they are able to carry on a conversation.  It was so much fun to just sit and talk.

Early evening when Oldest Son got home from work, he stopped in to pick up my list of herbs I want to plant for my window garden.  He said he would go today and get the plants or seeds so I can get started with that project.  If I can keep them alive I should have a mini jungle on my window sills in another couple of months.  I like the notion of having fresh herbs to use.  Having green, growing plants in my apartment is just a bonus.

I thank God every single day for my family.  I have truly been blessed.
Posted by Vicki at Monday, May 09, 2016