Do You Remember May Baskets?

When I was a small girl, at least 60 years ago, there was a spring tradition that has since gone by the wayside.  That was the tradition of giving friends and neighbors May Baskets.

About the middle of April Mother would set out paper and scissors and glue and help my sister and me make May Baskets.  These weren't traditional baskets but looked like these. 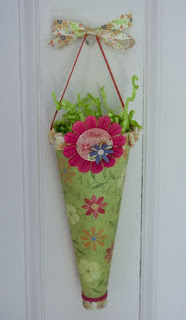 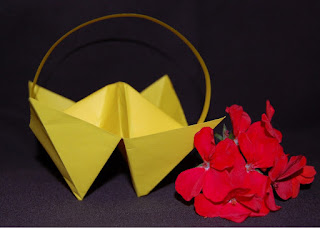 If we had colorful construction paper, we would use that.  Or often we would use wallpaper left over from wallpapering a room in our house.  Mother was frugal.

The morning of the first day in May would find us hurrying through breakfast.  As soon as Mother was satisfied that we wouldn't starve between breakfast and lunch, our May Baskets were carefully stacked in a cardboard box and off we would go.  The way to deliver our baskets was to sneak up on a neighbor's front porch, hang a basket from the doorknob, ring the bell and scurry off around the corner of the house to peek and watch the reciepient claim their prize.

Mother made sure that there were enough baskets for each house on the block - both sides of the street.  There was even one for the grouchy old lady on the corner.  I remember being astonished at seeing a smile on her face when she found her basket.

When the last basket had been delivered, we hurried home to find several May Baskets waiting for us, filled with all sorts of sweet treats.

That was a more gentle time.  It was nice to have been given baskets of treats, but the fun was in the giving.  Too bad we don't do that any more.
Posted by Vicki at Sunday, May 01, 2016