Pictures For My Cousins

Today on the Book of Face, my cousin Linda posted this photo. 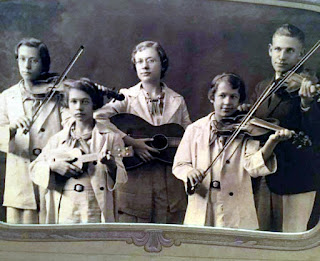 This musical group are my mother and some of her siblings.  I had never seen this picture, and it came as a surprise to me to see Mother holding a ukulele.  I knew she had played violin, cello, guitar and piano, but I didn't know about the uke.  Would have been nice if she had passed those musical genes on to me, but no such luck.

Anyway, because I am easily distracted, I stopped what I was doing and went through my old family photos file.  I found a couple of pictures I thought my cousins might enjoy. 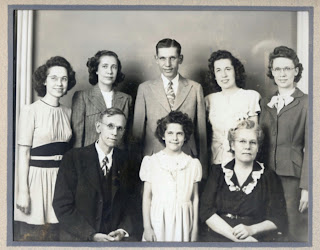 This is the official family portrait.  Grandpa and Grandma are in front with Emily.  Marjorie, Elaine, Duane, Margaret and Adella are in back.  Judging by Emily's age and the fact that Grandpa is in the picture (He died in 1947.) I would guess this was taken about 1945.  My cousins have likely seen this one, as I believe each of the siblings had a copy. 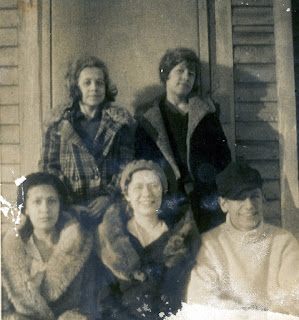 I don't know where this was taken, or when.  Elaine, Adella and Duane are in front, with Marjorie and Margaret in back.  I think Mother looks about 15 years old, which would make the date about 1940. 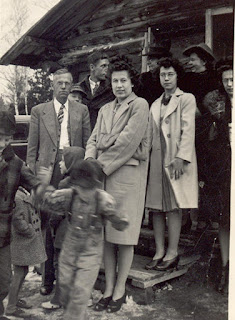 Mother told me this picture was taken in front of the building in Nebish where Grandpa held Sunday church services for the Indians.  As far as I know, Grandpa was not an ordained minister, but felt called to preach.  His family accompanied him to these services and provided the music.  The photo was probably taken in the early 1940's.

One of my cousins remarked on the FB post that my Uncle Duane had been the favored one because he was the only boy in the family that included six girls.  And this was probably true.  He is quoted as saying that his sisters got him into trouble with their parents by telling them whenever something bad happened, it was Duane's fault because he made them do whatever the mischief was.

Uncle Duane had a delicious sense of humor.  Combine that with a quick mind and shenanigans resulted.  One of my favorite Uncle Duane stories had to do with stealing melons.  Duane convinced some of his visiting cousins that it would be fun to go steal some melons from a neighboring garden.  He led the cousins, sneaking up and down the streets, through back alleys and back yards until, thoroughly confused, they arrived at the melon patch.  It was only when they took a good look around that they realized they'd been had.  They were stealing melons from Duane's family garden in his own back yard.

I think Uncle Duane may have found a way to extract just a little bit of revenge on his sisters for their tattling.  He waited until his parents were away from home of an evening.  He would then rattle a doorknob like someone was trying to break in, or he would crash together pots and pans to create as much racket as possible, or he would make all sorts of ghostly sounds.  Any one of these would send his sisters, screaming in fear, upstairs to lock themselves in their bedrooms.  I am told it worked every time.

Many thanks to my cousin Linda, Duane's daughter, for posting the picture on FB that sent me on this pleasant stroll down memory lane.  We really should do this more often.
Posted by Vicki at Monday, May 02, 2016