When I was growing up, my Dad usually had two cars.  One was the family car that we drove to town for groceries and other shopping and drove to church on Sundays, and the other was what he called his work car.  That one he drove to his job as a Grain Sampler in Willmar.

I never cared much one way or the other about the family car.  But, Oh how I loved his work cars.  The ones he had when I was old enough to drive were an early 1950's  faded blue Plymouth and a gray Studebaker, also early 1950's vintage.  These were not spiffy classic cars.  These were dirty, rusty and disreputable looking cars.  They smelled of grain dust and oil.  They were parked away from the house as they were always leaking some sort of fluid from underneath.  The only thing he asked from his work cars was that they should run well enough to get him to work and back home again.

Whenever I could wheedle Dad's car keys from him, I drove one of his work cars.  They were great.  I could go places with friends and not worry about the car.  I could put a ding in the side of one, and if I covered up the new scratch or dent with a little mud, nobody could tell it from the dents already adorning the car.  Don't ask me how I know this.  I think that driving these old cars was reverse snobbery, in a way.  The kids at school had their highly polished, fancy painted, souped up Hot Rods.  I had Dad's old work car.  This appealed to my sense of humor.

This was the last of Dad's work cars that I remember. 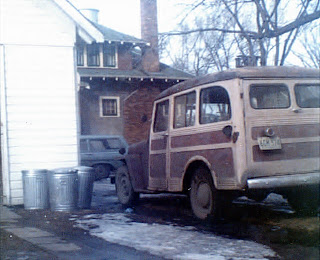 Unfortunately for me, I no longer lived at home when he had this car, but I remember that it was at least as disreputable as his previous work cars.  It might have been worth living at home yet just to have been able to drive it.

Dad told me once that he would sometimes take my sister to school in this car, and that she would have him drop her off a block or so away from their destination so none of her friends would see her in the car.  I expect that I, on the other hand, would have been more likely to pull right up to the front door, or park it in the first row of the parking lot.

I've always been ornery that way.
Posted by Vicki at Monday, January 17, 2011