So, when I shopped for groceries I found ham and beef roast on sale.  Brought home a ham and two roasts.  Cut the meat from the ham bone and cubed it.  Cut both roasts into cubes and browned the cubes in the oven.  Stuffed the whole shebang into pint jars and canned them. 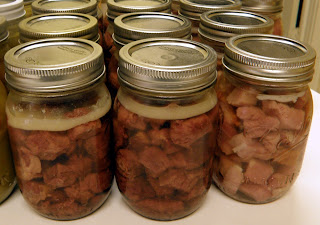 Canned meat isn't pretty.  Jars of canned peaches are pretty.  Jelly in jars is pretty.  Meat is not.  But it doesn't have to look pretty to go into a ham and scalloped potato dish or into a country beef stew or homemade vegetable beef soup, which is where these jars of meat will wind up.  I think I need to can more ham and beef the next time there is a sale.

I had a little ham left over.....not enough to fill a pint jar.  So into my pantry I went and dug out a bag of dry split peas and a couple jars of carrots.  Dumped them into a stock pot along with the broth that I had boiled the ham bone in, the leftover ham and the meat from the ham bone, threw in a handful of dried onion and a little pepper.  Tossed in a pint of celery that I had canned a while back, just for fun.  Brought the soup to a boil and then let it simmer on the back burner all day.  This is seriously good split pea soup.  Had a bowl for supper and canned the rest. 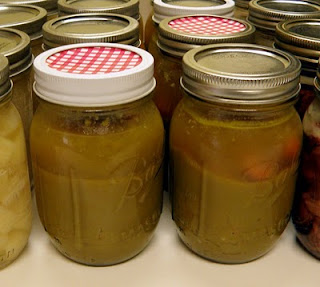 This soup separates during canning, but combines again when heated and stirred.

Then I decided to try something just for fun.  I had found a recipe for canning French Fries.  I already can potatoes.  I do this because I can get a pretty good price on a large bag of potatoes as opposed to the smaller bags.  Trouble is, I can't eat even a small bag before they go bad.  Canning them solves this problem and I can have canned potatoes boiled, mashed or fried.  Works like a charm.  I love French Fries.  So I decided to try this recipe.

I just peeled and cut them lengthwise into fries, packed them in wide mouth pint jars so they would be easier to take out of the jar, covered them with boiling water and ran them through my pressure canner.  I only had four empty wide mouth pint jars for the French Fries, so I filled enough small mouth jars with cubed potatoes to fill the canner. 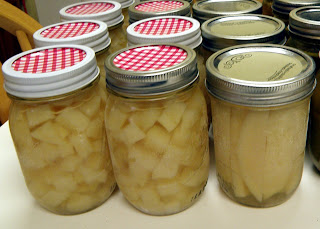 Of course I had to give the fries a taste test, so the next day I opened a jar.  These only take a couple of inches of oil to fry, so I heated the oil, dumped the drained fries into the pot and let them brown.

I really can't tell the difference between these canned French Fries and those I have made with raw potatoes.  They are yummy.  I may have to can up a few more jars of these.

And with that, the great canning marathon came to an end. 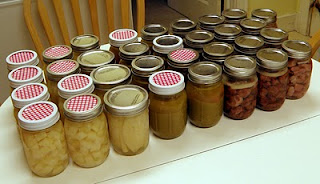 It gives me a sense of accomplishment to see these jars of meat, soup and potatoes on the pantry shelves and knowing that if I get a hankering for beef stew and biscuits, I don't have to run to the grocery store for the ingredients.  Grab a few jars off the pantry shelves and before long, dinner is served.
Posted by Vicki at Monday, January 10, 2011