I don't have cable TV.  I don't watch enough TV to justify paying the high fees.  I have an antenna.  It works well enough so that if I do want to watch TV, I have the choice of between 8 and 10 channels.  More than enough for me.  Most of the time.

This past weekend I was in my living room doing some hand sewing on a quilt.  Decided to watch a little TV while I worked.  This was a mistake.

Aside from the Public Broadcasting channels, there were mostly a variety of infomercials on.  At least half of these were for creams and lotions that, should I immediately call to order because operators were indeed standing by, holding their breath waiting for me to pick up the phone, credit card in hand, would take away every wrinkle that ever thought about appearing on my face.

I have a news flash for those people.  I am perfectly content with my wrinkled face.  The crow's feet around my eyes and the deep lines on either side of my mouth show that my sense of humor is alive and well and that throughout my life, I have laughed much more than frowned.  The rest of the lines and wrinkles give this face character.  They show that I have lived, not just existed.  When I see someone of my vintage whose face is perfectly smooth, I rather feel a bit sorry for them.  How can you lead a full life and not have it show in your face?

My Grandma Matheny had one of those faces that showed that she had lived.  She was a true pioneer in the northern Minnesota woods, moving to that area with her family when most roads were logging roads or trails.  Train travel was new to that part of the state and the railroad lines didn't reach as far north as she lived in the log house built by my Grandfather.  She raised her nine children there, without inside plumbing and without the modern conveniences that we are convinced we could never live without.  Grandma's face was lined with wrinkles.  I thought she was beautiful. 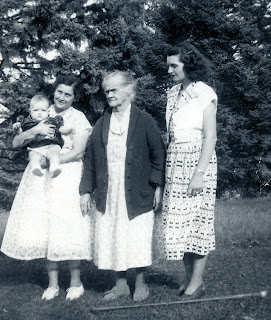 Grandma with Clarice, Shirley and one of Shirley's children
Sometimes when I was just a little girl, I would sit on my Grandma's lap.  Once in a while I would sit on her lap while she sat on the heavy, cast iron oven door of her wood-burning kitchen range, waiting for the room to heat in the early morning, just as my Dad had done when he was a little boy.  I remembering reaching up and touching her wrinkled face.  It was soft as silk.  Her smile deepened those wrinkles, and she was all the more beautiful to me.  I guess that along with that wrinkled face came the unconditional love that a Grandma has for her grandchild.
What I wouldn't give to see that wrinkled face again.
Posted by Vicki at Friday, January 14, 2011