My youngest son's family has the Elf on the Shelf.  My Kindergarten aged grandson, Jacob, named the elf "Chippy."  Every day my son posts a photo of Chippy on Facebook , showing where he is each morning when he returns from Santa Land.

Chippy is a pretty inventive little guy.  He was in the silverware drawer, in the butter keeper inside the refrigerator and this morning he was on the couch, wearing headphones and listening to Christmas music.

But the best one so far was this one. 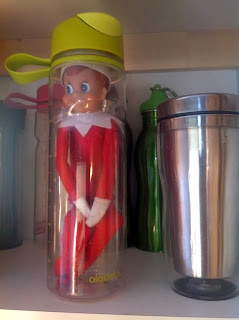 When Jacob asked his Dad how Chippy got the lid back on, David replied, "Magic."

When I talked with my son a couple of days ago, I told him that it was probably pretty pathetic that his mother, the grandmother of his children, had to check Facebook each morning, first thing, to find out where Chippy was that day.  I also warned him that if he should get word that his mother was locked away in a rubber room, clad in a huggy jacket, it would probably be because her neighbors had heard her, laughing out loud, all by herself and figured she had finally gone off the deep end.  And it would be all his fault!  And Chippy's.
Posted by Vicki at Sunday, December 08, 2013