I have stuff to get done the next couple of days while the temperatures here are a bit lower and my apartment is a bit more comfortable than it has been lately.  Yes, even those of us who are retired still have stuff to do.  The laundry lady is on strike and the cleaning fairy quit.  The dogs will be out of food in a couple of days if I don't get busy and make another batch.  And the grocery store has turkeys on sale again so I need to hop on the bus and go get some to replenish my supply of home canned turkey.  I seem to go through the canned turkey faster than anything else on my shelves.

So here are some pictures of Dad in no particular order.  Enjoy. 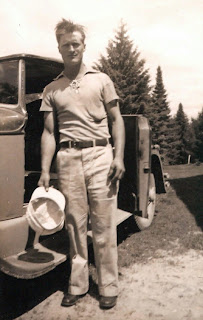 Dad was about 20 years old in this photo. 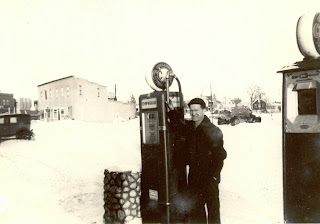 Dad at the gas station in Blackduck where he worked in about 1947. 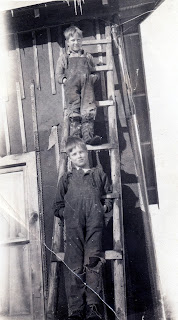 Dad at the top of the ladder and his brother Bruce at the bottom - about 1919. 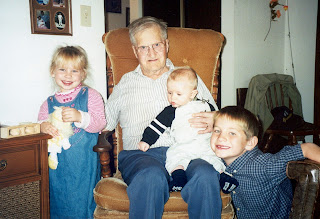 Dad with some of his great-grandchildren - Nicki, Zach and Chris.  This must have been in about 2000. 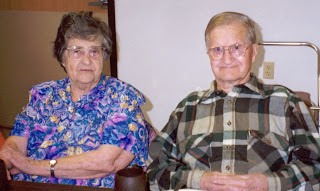 Dad with his sister, Clarice.  Date unknown.  I like this picture because of Dad's smile, which was so typical of him. 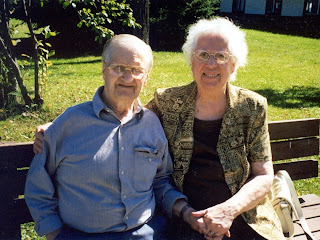 Dad with Mom's sister, Margaret.  I love this picture just because. 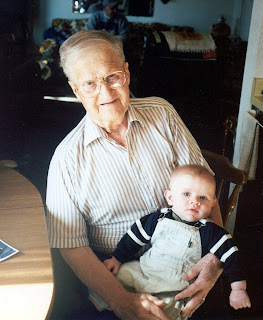 Dad with his great-grandson, Zach. 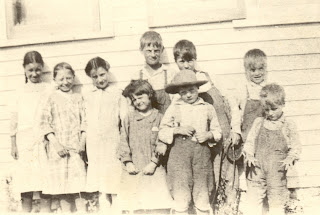 This picture was taken around 1916 at the one room White Pine schoolhouse where the Matheny children attended school.  The three boys in back, from tallest to shortest are Dad's brothers, Keith, Kenneth and Bruce.  His sister Clarice is the little girl in the darker dress and Dad is the little boy in the overalls on the end. 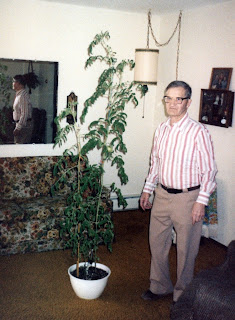 Dad and the Giant Tomato

Do any of my children remember the monster tomato plant?  Dad grew tomatoes on the balcony of his apartment in Blackduck.  He brought this one in the house before the first frost and the silly thing just kept on growing.  There was even a write-up in the local newspaper with this picture.  I teased Dad that it must have been a slow news day when the article appeared.  He was pretty proud of that tomato plant.

That's all for now.  I will post some pictures of Mom tomorrow.