Recently I connected with a cousin of mine.  She has lived for many years on the other side of the country from me, and I don't think we have ever met in person.  That doesn't matter.  We are family.

My father and her grandmother were brother and sister.  I have a story or two about them I want to share with my cousin.  Messaging isn't adequate - hence this post for her and for anyone else who might find it interesting.

My Dad and his sister Clarice had a love for one another that one doesn't often see these days.  I have no doubt that each would have moved Heaven and Earth for the other.

Clarice was born in 1908, the seventh child in a family of nine children.  Dad was born in 1911, being number nine.  Dad often told his siblings that their parents saved the best for last.  :)

The earliest photo of my Dad was taken in front of the first log cabin my Grandfather built in northern Minnesota.  He is in the arms of his sister, Clarice. 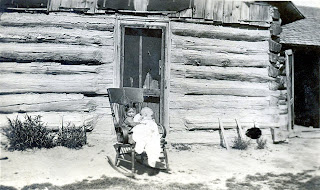 Clarice was in charge of watching over her baby brother. 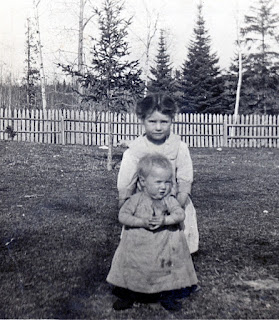 And yes, Dad is wearing a dress.  At that time it was common practice for little boys to wear dresses until they were old enough to manage the fly buttons on their long pants.

I was lucky enough to be born into a loving family.  I knew that I would be welcomed with open arms, hugs and kisses no matter which aunt or uncle I went to visit.  But a visit with Aunt Clarice was just special.  She had a sweetness about her that was beyond compare.  That being said, she could give as good as she got.  Those two liked to tease one another.  It was never mean.  Dad might remark that Clarice was getting a bit broad in the beam and she would tell him he wouldn't be so chunky if only he wasn't so darned short.

When both were in their 90's they were in the same nursing home in the small town near where they grew up.  The two of them would be side by side in their wheelchairs, doing their upper body exercises led by one of the staff.  After a while Dad's arm would reach over and lightly cuff his sister on the back of her head.  More exercise - 1 - 2 - 3 - 4.  And Clarice would double up her fist and punch Dad on his arm.  After a couple more swats between them, the aide would say, "Now you two Matheny kids behave yourselves."   And they would - for maybe 5 minutes.

Sadly, Clarice had a form of memory loss that didn't allow her to retain the spoken word for more than a minute or so.  I witnessed the following conversation between them.

That conversation was repeated again and again.  Dad showed no sign of impatience with her.  I later asked Dad if it drove him a bit crazy to answer those same questions over and over.  His reply was, "Why should it?  She is still my sister and I still love her." 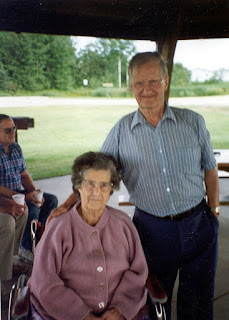 Dad died in 2004.  At his funeral I was holding it together pretty well right up to the time Clarice was wheeled up to Dad's coffin to say her last goodbye.  In a moment of complete clarity she said, "Oh, Ralph."   Her hand reached out and gently caressed his face.

Clarice followed her brother to Heaven shortly thereafter.  I like to think they are together, laughing and teasing and hugging as they did all of their lives.
Posted by Vicki at Thursday, August 09, 2018