This is my building. 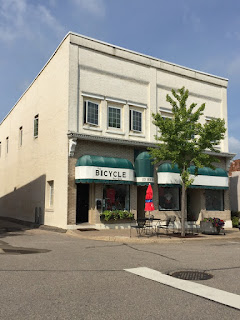 It was built in 1895.  Last summer my landlord had the stucco taken off the front of the building to reveal the original white brick underneath.

A couple of days ago my landlord stopped in to tell me he was replacing the six windows across the front of the building.  Three of them are in my living room.

It seems that the city, in trying to preserve the old look of the downtown area, wants the old buildings brought back to their original architectural designs.  Sometime in the life of this building, the original tall windows on the second story were shortened and modernized, probably when the apartments were partitioned off.

Sure enough, the last couple of days the sounds of banging on the brickwork and sawing through Lord only knows what have filled my apartment.  They started on the side hidden by the little tree out front and are moving steadily toward me.

Here's the thing.....it is winter.  It is cold outside.  It snowed some this morning and is likely to do so again tomorrow.  I hope they are just doing the prep work and will change out the windows come spring.  But if the new windows go in this week, it will be interesting to say the least!