I own it.  And boy, howdy, was I wrong when I described this storm as a non-event to someone who had left a comment on yesterday's post.

Shortly after writing that comment response, the wind picked up.  The little bare naked tree outside my window bent over and snapped back again and again until I feared it might break.  Visibility was less than a city block, diminished by blowing snow.  I had been listening to the scanner and could tell by the traffic between police and dispatch that we were in trouble.

Earlier in the day when I wondered why it wasn't snowing yet, I failed to see that there was precipitation in the form of light rain.  Which froze on the roadways.  Which sent vehicles careening into the ditches.  After the rain turned to snow, the wind started to blow.  Drifts began to form.  Soon the emergency vehicles were getting stuck in the drifts.  At one point there was a police car stuck in the snow along with half a dozen other vehicles that couldn't make it up a freeway ramp.  More than once an officer came on the radio to warn of roads that were blocked by snow drifts.  The snow plows were giving it their all, but were having trouble keeping up, and south of my location, they were pulled off the roads because they could no longer see the road.

And then my lights went out.

I have developed a routine when I lose power.  I keep flashlights, candles and matches in every room where I can easily find them.  So I lit a candle and headed toward the rear of my apartment.  I keep four five-gallon, empty buckets handy, and those I filled with water from my bath tub while I still have water pressure, to use for washing, flushing, etc.  Then I grabbed my little battery operated radio and settled down in my recliner to wait.

I was lucky in that I only had to wait about an hour and a half before power was restored.  There have been times when my power has been off for much longer periods of time.

I made a huge mistake in underestimating the power of this storm.  I tend to forget that because I live in town, surrounded by two and three story buildings, that the effects of snow and wind are not always as obvious as they are out in open country.   Or in the residential areas.  This photo was posted on Facebook this morning by my children's aunt, after she had shoveled a path from her house to the street.  She lives a bit closer to the city than I do. 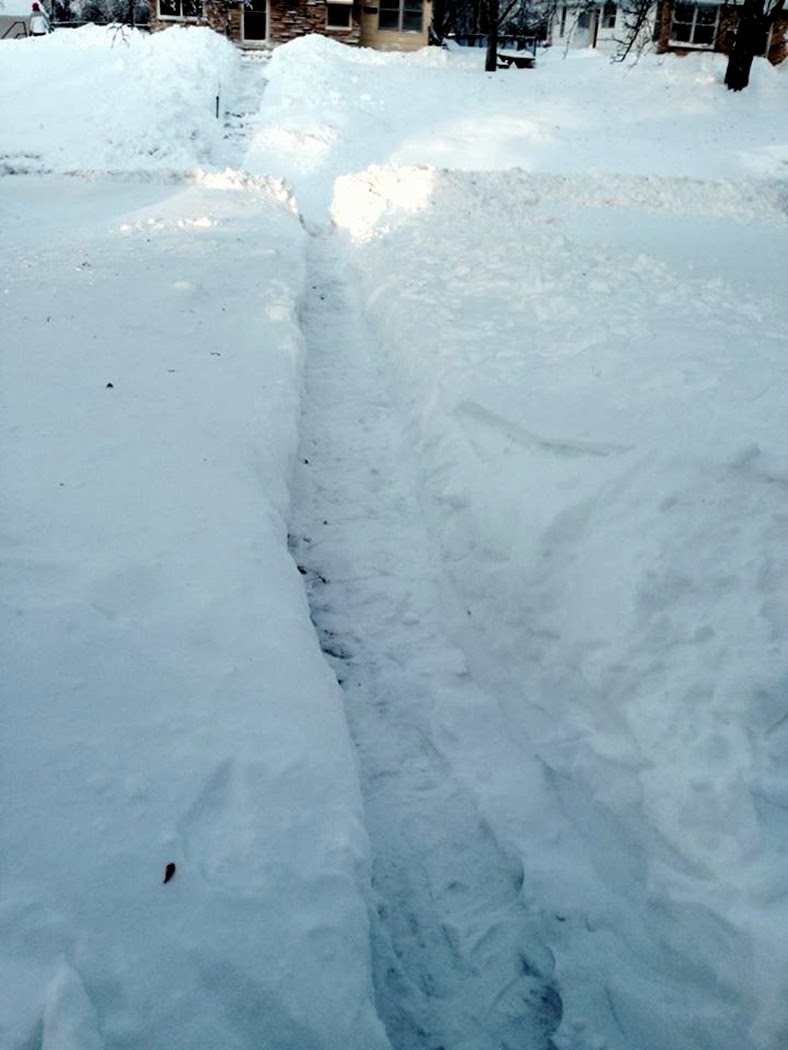 This morning there is still a bit of wind, but much lighter than yesterday, and the sun is shining.  There is a small army of city workers out clearing the sidewalks, and the plow has made one pass down the street in front of my building.  I don't know how much snow we got, but the ledge outside my window, which is about 18 inches wide and runs the width of the building, has about a foot of snow on it.

I long for violets and lilacs.